What happened on the hillside 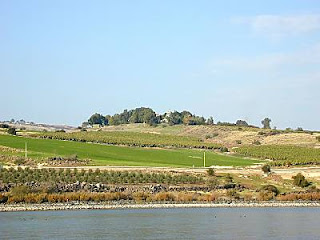 I imagine a sunny but rather cool day, possibly early spring.

It is the beginning of Jesus’ ministry: he has been baptized; he has spent 40 days in the wilderness and then been tempted; he begins to preach in Galilee; he has called four disciples, Peter, Andrew, James and John; and he has healed the sick. Large crowds, some from as far away as Jerusalem, are following him to hear him speak.

Then something interesting happens, as Matthew tells the story. Jesus sees the crowds, and he goes up a mountainside and sits. His disciples come to him, and he begins to teach “them.” The implication is that the “them” is the disciples.

If that’s correct, then he sees the large crowds – and begins to teach the disciples with one of the most important sermons imaginable. But the crowds also hear him, because at the end of sermon the text says the crowds were “amazed” at his teaching, “because he taught as one who had authority, and not as their teachers of the law.” It was a message for his disciples that spilled over on to the multitudes.

And what did he teach?

The Sermon on the Mount is shot through with the idea of forgiveness, both implicitly and explicitly.

Blessed are the merciful.

First go and be reconciled to your brother.

If someone strikes you on the right cheek, turn to him the other also.

Let him have your cloak as well.

Go with him two miles.

Pray for those who persecute you.

Forgive us our debts, as we also have forgiven our debtors.

If you forgive men when they sin against you, your heavenly Father will also forgive you.

Do not judge, or you too will be judged.

So in everything, do to others what you would have them do to you.

There on that mountainside, Jesus speaks one of the most radical sermons ever preached. It is also a sermon he will live out as a ministry, a ministry of forgiveness and salvation, until it culminates on the side of another mount and in a tomb carved into rock and dirt.


To see other posts on forgiveness, please visit Bonnie Gray at Faith Barista.

Photograph: The traditional site of the Mount of Beatitudes, from Bible Places.
Posted by Glynn at 5:00 AM

Ahhh . . . in 2007 my husband and I were blessed with the gift of a two week trip to Israel. We stood on that hillside and my husband got to teach this passage to the group we were with. It was indeed beautiful and sunny and the flowering grasses stood high. A message to remember - thanks for sharing.

thoughts to carry with me into my day. Thank you for this post Glynn

Really odd - I was just listening to the Sermon on the Mount on tape this morning when I couldn't sleep. Hmmm...maybe God is trying to tell me something today? I will listen. Thanks, Glynn.

I love the sermon on the mount. I can just see it, imagine it, smell the smells, and wonder what it would have been like to see Jesus.

The Sermon on the mount. One time--instead of preaching a sermon--I simply read that whole passage. Very touching and very convicting.

You know, it really helped that you placed me there, Glynn -- on that day, with the scents and the feel of the warm sun on my place. You've made that age-old passage real for me today. Thank you.

Glynn, this post felt dramatic to my heart, as you brought me to a mountain top with Jesus and then showed me the tomb where he lay at the end. Forgiveness is death. Death of myself and my hurts and pains. This gives me hope that one day, this will all end. For now, I pray I can enter into that rest in my heart and spirit. Thank you for this moving jam!

Forgiveness is completely radical; it's a mark of the upside down kingdom.

I love this --- what I am amazed by is the fact that all of those people were able to hear him teach. What a gift that must have been.

As always, I love the reminders of what forgiveness means.

This is a very good piece.