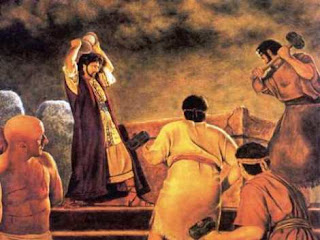 My wife and I were married at a Baptist church in Shreveport, La. – Mildred Crowe Baptist Church, to be exact. The church building is still there on North Market Street but the name and denomination have changed.

Our wedding was at 5:30 p.m., followed by the reception in the church hall. The church was crowded – all my wife’s family lived in the Shreveport/northwestern Louisiana area, as did and my father’s side of my family .

The wedding ceremony took less time than the bridesmaids and bride took to walk up the aisle. I mean, it was fast. And there was a reason for the speed.

A revival service was scheduled at 7:30, and while we could stay in the church hall, the cars had to be gone from the parking lot.

So I always associate our wedding with revival, or renewal. Revivals are an opportunity for churches and the people in the communities surrounding them to take stock, renew vows, and rededicate themselves. It’s both a corporate thing (for the church) and an individual thing (for the people).

I’ve attended a few revivals (almost always at Baptist churches) and one Billy Graham Crusade, which was a kind of “mega-revival.” (The Billy Graham Crusade was a date – the girl wanted to attend it.) The speakers are usually outstanding (a good speaker not necessarily meaning a fire-and-brimstone speaker); there’s a lot of singing, and then someone leads the congregation in singing “Just As I Am” while people make their way to the front.

The New Testament model for revivals is found in the gospels – John the Baptist preaching the need to repent and preparing the way for Jesus. Jesus didn’t so much preach and teach revival as much as he did something entirely new – the gospel among us. In the Old Testament, there are numerous examples of Israel turning from its ways and turning back to God.

The revival/renewal that always creates a sense of wonder (and some foreboding) for me is the story told in 2 Kings 22-24. The King of Judah, Josiah, is 26, and in the 18th year of his reign. He is trying to do what is right. He sends his secretary to the temple to have the high priest get the funds together that have been collected to repair the temple. The secretary goes to see the high priest, named Hilkiah. And Hilkiah – the high priest! – says something that is startling.

“I have found the Book of the Law in the temple of the Lord.”

Things had gotten so bad that the high priest didn’t know where the Book of the Law was, and then found it somewhere in the temple. That’s the equivalent of a church minister announcing the congregation that he has found the Bible, hidden away in a closet, that no one's seen for a few generations.

The secretary returns to the King Josiah, tells him what’s been discovered, and proceeds to read from it “in the presence of the king.”

And a revival starts. Josiah tears his clothes, consults a prophetess (who has good news for the king but bad news for Judah), renews the covenant at the temple, and cleans house. He throws out the pagan priests appointed by previous kings, takes the Asherah pole from the temple and burns it, tears down the temple quarters for the male prostitutes, destroys all of the pagan altars, shrines and high places throughout the country, and then eliminates the mediums, spiritists, household gods and idols in Judah and Jerusalem. And then he orders the Passover to be celebrated – the first time since the days of the judges almost 400 years earlier.

It didn’t last, of course. Josiah was followed by a line of evil kings and then the fall of Jerusalem to Nebuchadnezzar of Babylon. And it never lasts, human nature being what it is.

That’s why the final revival, the last renewal, began when a young teenaged girl in Nazareth was told she was going to bear a child. The child.


To see other posts on renewal, please visit the One Word Blog Carnival sponsored by Peter Pollock.
Posted by Glynn at 6:00 PM

How cool to associate your wedding with revival. When Jesus comes back for His Bride that'll be a pretty outrageous revival! Love how you wrap it up too. With Jesus' life, death, and resurrection followed by the coming of the Holy Spirit--revival took on whole new meaning. Great post, Glynn. Thank you.

So interesting to think of marriage in the context of the word "revival" whose roots mean "to live again".

So... where did your guests put their cars?

Lovely to see into the beginnings of your marriage. And, for me, any place named Shreveport La, is seeped in mystery and long souther drawls. I have always swooned at that place name!

I assume you and your new bride didn’t stick around for the revival service that night? :-)

I love the story of Josiah also (it’s actually the next lesson we’re teaching to the 5th grade class this Sunday!). And Mary — what a great pick in telling the story of renewal…

That's pretty cool. Seems like churches don't do many revivals anymore. At least not around these parts. Sad, really. We need some reviving, I think.

I enjoyed your story of your rushed wedding ceremony and how you associate each anniversary with “Revival.” That is a great Bible story about Israel’s repentance and revival and the good king. Wow, what is this? It must be the long lost book of the Law? I enjoyed your statement to imagine a minister discovering his Bible? And lastly you end with the revival of all times when Mary was to be with Child.

Such a great post, Glynn. So many layers! Maybe all the different kinds of anniversaries of our lives should be revivals! So we could "live again"! Blessings!

Not sure why, but for some reason they have diffferent connotations for me. Thanks for giving me something important to chew on.

I used to love revivals as a child. Church every night -- usually in the heat of summer --- great old hymns sung -- and folks coming to know Jesus.

Then there was camp meeting...