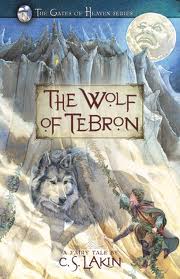 I've never been a fan of the fiction genre of fantasy.

Back in the mid-1970s, possibly because of the release of Star Wars in 1977, I went on a binge of reading science fiction: Robert Silverberg, Orson Scott Card, Robert Heinlein, Arthur C. Clarke, Frank Herbert (the Dune novels) and a lot of others. I enjoyed them, but I eventually lost interest and returned to mystery and contemporary fiction.

I was never really interested in fantasy, although the seeds were certainly sown by reading J.R.R. Tolkien’s The Hobbit and The Lord of the Rings trilogy in college and again right after college, and then rereading them shortly before the first Peter Jackson movie epic in 2001. And in both the 1980s and early 1990s, I read the Chronicles of Narnia by C.S. Lewis to both my children (born eight years apart so that’s why the gap in reading).

A few months back, I reviewed C.S. Lakin’s Someone to Blame, a contemporary novel I really enjoyed. She contacted me, and asked if I’d be interested in an Advance Reader Copy of her next work, a fantasy novel called A Map Across Time. Oh, I thought to myself, a fantasy novel. I don’t read fantasy. But I said yes, and in due course the copy arrived from the publisher. (It’s to be published March 4.) It’s the second in Lakin’s Gates of Heaven Series.

I was so impressed with the book that I ordered the first in the series, The Wolf of Tebron. Fortunately, the two novels are not dependent upon each other, linked only by an approximate time and place. Both books are subtitled “a fairy tale.”

I hope I can do justice to these books. They are that good.

In The Wolf of Tebron, Joran, a young blacksmith with a history he’s unaware of, sees his wife Charris in the close and mutual embrace of a neighbor. He’s so angry that he sends her away, back to her family in another town.

She never arrives. Then Joran’s nightmares begin, haunting his sleep with images of Charris trapped behind a window of ice. And then an odd local resident called the Goose Woman tells him he’s trapped his wife in a dream, and three keys must be unloosed to free her. But time is running out.

Joran, alone of his family, has the ability to speak (or mind-speak) to animals. As he struggles with whether or not to believe the Goose Woman, he meets a wolf named Ruyar whose paw is caught in a trap. Ruyar will accompany Joran on the quest to save Charris.

What follows is an extraordinary journey to the House of the Moon, the Palace of the Sun and the cave of the South Wind. The journey becomes a kind of pilgrim’s progress, as Joran learns from each new experience and from the direct teaching of Ruyar and his “wisdom of the wolves.”

To say more would give the story away, and it’s simply too good to be spoiled like that. But it reads so right, so true, that the reader eventually comes to understand that this is a story of both salvation and redemption for all of the characters. It is not only Charris who needs rescue.

The Wolf of Tebron is a wonderful story, richly imagined within a world that is both recognizable and yet otherworldly. It can be read by adults, by young adults, and even to older children. Lakin has created a fascinating story, and she just might turn me into a fan of fairy tales after all.

Next Friday: The Map Across Time.
Posted by Glynn at 5:00 AM

Thanks, Glynn! I enjoyed this book as well ... you could really feel Joran's suffering during his travels, and that made the redemption so much sweeter at the end.

I shall forward this title to my nephews, who love fantasy.

Thanks for the review.