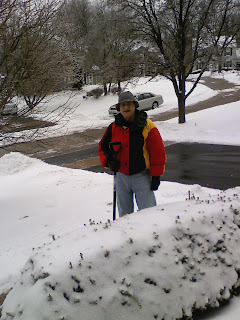 This past week has been all about – digging out.

The big winter storm that started Monday night and concluded Wednesday turned out not to be the “snowpocalypse” or “snowmageddon” it was predicted to be – for St. Louis. Actually, the snowpocalypse was farther to the north – I saw the pictures of Lakeshore Drive in Chicago, and Interstate 70 was closed from just west of St. Louis to Kansas City – that’s some 200 miles of highway. My youngest son reported a foot of snow in Kansas City.

We had about two inches of sleet on Tuesday (which was an absolute blast to remove from the driveway; yes, it was frozen solid) and about three inches of snow that finally ended late Wednesday afternoon. And, since you asked, that is indeed a picture of yours truly, victorious at having just finished shoveling on Wednesday, at least until the predicted snow for this weekend.

Our offices at work have been closed for two days, which means working at home. It’s no surprise, but I get more work done at home. We’ve still had some of our scheduled meetings via phone, but they don’t last as long. Since a great deal of my work happens online, I’m good to go as long as we don’t lose power. Four years ago, we lost power during an ice storm, and we lost it for four days.

I’m almost finished One Thousand Gifts by Ann Voskamp. Oh, what a book this is. It’s mediation, rumination, reflection, devotional – all these things and more wrapped up in simple, plain language straight from the heart. She takes the everyday and finds the beauty and the thankfulness in it. But then she takes it to another level altogether. It’s a wonderful book. (A lot of other people think it’s a wonderful book, too. It was just published in January, has more than 200 reviews at Amazon, and hit #10 or #11 in its category on Amazon’s best-sellers list.)

I met Ann at Laity Lodge in Texas last fall. She’s from even farther north that Marty Duane – she lives in Canada. Her husband Darryl is a farmer. To read her book now is like talking with her then – she is exactly like the book she’s written.

Another good thing this week – the long-awaited DVD set of series eight of the British spy drama M1-5 arrived in our mailbox. Since last spring, we have watched seven seasons (via Netflix, mostly). We had a real problem with Season 5 – Netflix didn’t have enough copies, and someone was keeping the first disk set forever. We were such fans that I finally said phooey on Netflix and ordered series 5 from Amazon. It was buy it or wait six months. We bought it. It’s one of the best written, best produced television series we’ve ever seen, even if the Americans (the CIA) end up being the stereotyped bad guys most of the time (or, if not the bad guys, at least Machiavellian and untrustworthy). We’ve seen two of the 10 episodes, and we’re torn between wanting to watch them all now and pacing them out.

Photograph: Husband Freezing by Janet Young, taken from the doorway of the nice warm house while husband shoveled in the freezing cold. Used with laughing permission.
Posted by Glynn at 12:10 AM

Am waiting for my copy of Ann's book to arrive.

As for the snow: We did our duty last winter. It's almost balmy here today.

Yep. The LSD in Chicago was a scary sight for even us born and bred Chicagoans to behold! I'm so sorry that one person was lost, swept in the lake by a wave (not sure if he was a pedestrian, or a driver who left his vehicle), but glad that there weren't even more fatalities.
I'm glad you can work from home and that it works out well for you.

going to look into 'one thousand gifts'

My favorite part of this entire distuba-rumination (yeah, I invented that word) is "phooey on Netflix."

this looks all too familiar ...