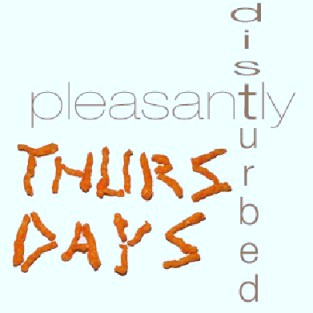 It’s time for another edition of Pleasantly Disturbed Thursdays, led by the totally fearless Marty Duane Scott, who, oddly enough, has been off sitting in some chair lately (or, more precisely, not sitting in a chair).

Most of my family and friends would tell you that I am not the outdoorsman type. I don’t hunt. I don’t fish (my father hated fishing so we never went). I do remember camping – I believe it was right after I graduated from high school. I do like to hike and bike (a rhyme!), but I’m not one for an extended stay in the wilderness or woods. Say, longer than three or four hours.

So I’m surprised that I’ve enjoyed reading Cynthia Ruchti’s They Almost Always Come Home. Virtually the entire novel is set in the Canadian wilderness, where bathrooms are holes behind logs and you can take a bath in the stream or lake. It’s a story about a husband who disappears on a solo trip in the wilderness, and his father, his wife and her best friend go looking for him. It’s a great story, and I’m hoping to have the review posted tomorrow.

My current reading is Sam Batterman’s new novel Maximal Reserve. His first novel, Wayback, is a great read, and this one is turning out to be just as good if not better. I’m amazed at the science and technology details he uses in his books – and how he doesn’t choke you with them. I can barely put the book down.

Late last year, I read The Apple Trees at Olema, a new book of poetry by Robert Hass. Hass has some considerable standing the poetry community. He’s won the National Book Award and the Pulitzer Prize, among a lot of other awards. He’s helped Czeslaw Milosz translate numerous volumes of poetry from the Czech. He is a name.

I liked it, although I have a tendency to get uncomfortable when profanity is used a lot, which it was in a few of the poems. But Hass is a great storyteller in his poems, and there were many fine ones and lots of good ones, and overall the collection is well worth one’s time (and money). Just as I finished, the new issue of Poetry arrived. Included it in was a scathing review of the Hass book. And I mean scathing. It was so ugly that I wondered if I had read an entirely different book. The next issue of Poetry contained a number of letters attacking the reviewer. And then the following issue had a letter attacking the attackers.

I stopped reading at that point. So a little literary controversy spices things up. But whatever else you want to call it, cruelty is ugly. So is meanness, especially when it’s cloaked in literary criticism.

On a happier note, plans are well underway for my grandson’s first birthday next month. Yes, he will be one year old. He was a late crawler (he could crawl backward just fine), but learn to crawl he did, and the next day crawled up the stairs in our house (supervised). We’re all battening down the hatches. 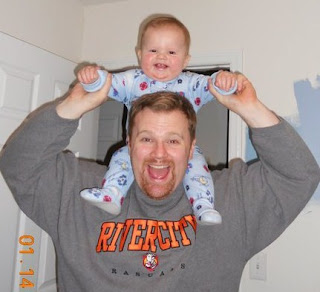 To see more Pleasantly Disturbed Thursday posts, please visit Helen over at Random Musings. Marty Duane Scott is either on vacation or still trying to sit in that chair.

Photograph: Cameron and his dad Travis by his mother Stephanie. Swiped shamelessly off of Facebook. Oh, wait, I mean used with permission.
Posted by Glynn at 5:00 AM

This makes me smile - the announcement of not being outdoorsy, the thought of babies crawling backwards (mine did that too - does their reverse gear work first?) and birthdays. Has it really been almost a year?? :)

I love the sound of the book by Cynthia Ruchti... I wrote it down.

Cameron is one year old already?!

I also get Poetry and read the issue and remarks on Hass. Could not agree more with your take on the ugliness.

What an adorable baby!

I'm sorry the man's work got a vicious review. A gentle critique of work one put his heart in is difficult enough to take in stride.

First off, I can't believe Cameron is going to be a year old! What a cutie.

I just finished reading The Winter of Our Discontent by John Steinbeck on my kindle. The first 9% (however many pages that is--beats me) was devoted to various reviews of the book and of Steinbeck. Many critics hated the book and wrote about how he SHOULD have written the book. Boy, am I glad I waited to read those reviews until after I'd read it! I thought the book was fantastic, and well deserving of the Literary Nobel Prize it received. Some critics like to point out how they would have written something differently. Maybe they should just shut up and write something themselves. I don't mind constructive criticism. I think it's helpful, but venomous attacks I don't understand. (Sorry for the mini rant.)

I am "just now" getting back from school life. I had a huge test which altered the face of my career, so I really needed to focus. That's why I wasn't sitting in any chairs (thanks for the link) and that's why I couldn't host PDT.

Thanks for participating though!

Oh, and I've now added that They always come home to my wishlist. Sounds like a good book!

And I camp, and hike, and FISH! I'm going to take you fishing someday. You will never have to bait a hook or reel one in. You will simply write poetry while I catch 'em.