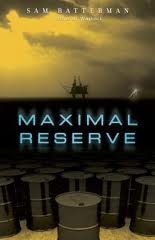 Almost two years ago, I read an extraordinary techno-thriller called Wayback by Sam Batterman. In the novel, scientists had discovered a way to return to the time immediately prior to Noah’s ark. Fast-paced, full of science and action-packed. It reminded me of the novels of the late Michael Crichton. At the time, I wondered what kind of story could Batterman write that would equal Wayback.

With Maximal Reserve, he did it.

Phil Channing is a brand new college graduate who lands a job in Texas (his girlfriend’s hometown) with Axcess Energy’s Exploration Division. He’s been taken on a tour of an exploration project off the Atlantic coast of Africa, where there’s evidence of a large oil field, but of a very different kind – a field that will prove that petroleum originates from deep within the earth. The shallowest access to the field lies under the state of – Israel. It could transform Israel into a larger oil producer than Saudi Arabia , changing the geopolitics of the Middle East and the world.

Into this potentially explosive situation is added corrupt U.S. politicians, the Russian mafia, the Syrians seeking to strike a blow against Israel, an increasingly unbalanced scientist, Israel’s secret service Mossad – and a love story. It’s a lot to manage, and the author pulls it off.

Maximal Reserve is almost breathtaking to read, moving so fast that it’s hard to put down. Batterman takes the reader on a wild ride, with lots of bodies strewn along the way, abd ends in a cliffhanger beneath the desert floor near the Dead Sea.

The novel is full of scientific detail but it doesn’t overpower the story. It also explores what’s called “abiogenic theory” of the origin of petroleum, and then moves the theory into a credible fictional rendering. The novel’s bibliography of the science and theory behind it testify to the depth of research.

Sounds like an excellent novel! Thanks for passing on the info.

Went to the local library Glynn and asked them to get me the first of this series. all based on your recommendation. how's that for pressure?