What I Wish Someone Had Told Me About Marriage 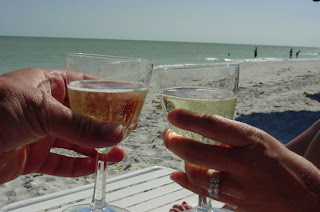 My wife and I had a not typical dating relationship and romance. We met during my last semester at college, and within three weeks were talking about getting married. I had the “talk” with her father in Shreveport, but wisely waited until the evening’s televised baseball game was over. I proposed to her while we were driving from Shreveport back to Baton Rouge, and I believe were about 30 miles from the LSU campus, somewhere in the Atchafalaya River Basin, when I officially asker her (she said yes).

I graduated in May and left the next day for Beaumont, Texas, to start my job as a copy editor on the Beaumont Enterprise. She returned to Shreveport to do a summer internship at the Shreveport Times. We saw each other several times that summer (Shreveport was about a five-hour drive from Beaumont), and then got married in August at a church neither of us attended. Pre-marriage counseling might have been around at the time but it wasn’t common.

We were married on a Saturday, returned to Beaumont on Sunday, and then both of us went to work at the newspaper on Monday (a two-journalist family).

We were young (she was 21 and I turned 22 two weeks after we were married). We didn’t know any better. All we knew was that we loved each other.

All of us bring stuff into marriage – personal history, lots of “baggage,” lots of expectations, a bunch of advice, and two starry-eyed kids.

Most of the advice you ignore, and, to be honest about it, most of the advice is useless. Marriage is one of those things that you can’t really explain completely to someone considering it. Some things have to be experienced. Once you have children, you can (and will) be a model for marriage – and that’s all the good and bad stuff combined.

There is one thing I wish someone had told me about marriage, but I most likely would have nodded like I understood and went on about my business. That one thing, though, is something critical, something hinted at in the wedding vows but never explicitly stated.

That one thing is this: marriage is not about me.

Marriage is about two things, one practical and one spiritual.

The practical point of marriage is family – providing a structure (even if we manage to screw it up) for the creation and upbringing of children.

The spiritual point of marriage is that great mystery – the symbol for Christ and the church.

It’s about “us” – a new creation, a oneness. We have a earthly purpose – family – and a spiritual purpose – to be (however imperfectly) and to reflect Christ’s love for the church.

But it’s not about me.


To read more posts on “what I wish someone had told me about marriage,” please visit Bonnie Gray at Faith Barista.


Photograph: Cheers by Jeff Klisares via Public Domain Pictures. Used with permission.
Posted by Glynn at 5:00 AM

I agree 100%. And this is something that you can't learn by reading a book, or getting advice from a friend. Like you say, you have to experience the sacrifice, the wincing, the push and pull, to understand what it really means.

My interpretation of marriage - it is a form of therapy. I can't think of a better way to grow, or grow up.

Spot on Glynn. I was not yet 21 (I had to have my parent's sign a permission slip in Ohio) when we got married. My wife was already of age. :) After almost 38 years this June, I can say "it is not about me." Actually, if I had had my eyes open I might have found that out around day 3 or so but I didn't. We were both so naive. I do premarital counseling and often feel it is a waste since they rarely hear anyway. "Oh, we won't have that problem because we are in love." Aaahhh yeah. Anyway, sorry to go on. Thanks for a good post.

We also got married young--21 & 22, but we met at 18 & 19 and wanted to get married immediately (dumb parents!). Of course, now that I am a parent of teens, I understand.
Marriage is a great mystery. I'm 19 years in, and I have no advice for young marrieds. It's wonderful. It's awful. I wouldn't trade it for anything.

April and I were 21 and 20 years of age. We had known each other for about a year, but about 7 months of that was a long distance relationship.

I was 30 years old when I got married. By that time, not only did I know what I wanted in a relationship, but what I didn't want. You're completely right. It's not about me. It's about us, kids included.

Glynn,
That’s what I call a whirlwind romance. Ha.

I wish this weren’t true, as I have a daughter who is about to be engaged:
“Marriage is one of those things that you can’t really explain completely to someone considering it. Some things have to be experienced.”
But I know it is true, and it is how it is supposed to be. I will pass along to her your “one thing” though, that "Marriage is not about me." Very good!

Glynn,
Our story is pretty similar - and I don't run into people with similar stories very often at all! We worked together but didn't know each other well for 3 years. Then started working on the same primary care team for a dying child (2 nurse family). A month later, we started dating - 2 days before he moved 1500 miles away. We saw each other 3 times over the summer, and on one of those visits, he proposed. We were married in September by a pastor we didn't really know, with no premarital counseling. Both of us had been in our fair share of poor relationships prior, and I just "knew" the very first time he held my hand (during a prayer and outside of romance).

9 years later, we have had our ups and downs, but what we started that day in September 2002 has been the best thing of my life.

Love this! And yes, I think most of us would have nodded and acted like we understood...but again, there's no way to really know until you've experienced it. Great models help, too.

I've been married 7 years, but this was very inspiring to me right now:

"Most of the advice is useless... Some things have to be experienced."

That is the best advice for me now, to just continue to experience marriage as openly as possible. ;)

I'm a girl, so I loved hearing about your whirlwind romance and chuckled at young Glynn, sweating it out in front of the tube with future father-in-law. You smart young man! LOL.

i needed this tonight. more than you know.

You're right---I know the concept, but I also know I'm not going to totally understand till I'm married.

Thanks for sharing your wisdom.

Always a pleasure to read your wisdom --- and I love to think of the "starry eyed" you since I am know of the sage of experience.

Oh you are so right. Marriage is not about me. And that mysterious symbol? So right.

Bu what new bride and groom would ever believe it? :)