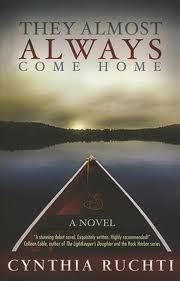 A husband disappears while on a solo canoe trip in the Canadian wilderness.

A wife, already considering divorce, believes he may have left her. Her anger is fed by the loss of their daughter three years before, a loss she blames her husband for.

Then his car is found. It’s been stolen.

That’s the basic introductory framework to Cynthia Ruchti’s They Almost Always Come Home. The Holden family sounds achingly familiar, falling apart in slow motion. Greg Holden, for most of the book, is seen only through the eyes of his wife, as her submerged anger begins to break into the open.

Libby and her best friend Jen join Greg’s father Frank in an expedition to retrace Greg’s path, knowing full well there could be a decomposing body at the end of their journey.

Ruchti does a masterful job on at least two levels. First, with the descriptions and narrative of the journey into the wilderness, she has the reader right there paddling in the canoe and carrying the boats and supplies over portages. Second, she takes a distinctly unlikeable heroine and transforms her from angry wife to discovering that what she may have lost is irreplaceable, how she has turned away from God, and how much she herself is to blame for the feelings she has towards her husband.

It’s a tightly written, well constructed story, gradually pulling back the curtains this family has drawn over its grief and fracturing. And then – the healing begins. And what has to be healed first is the wilderness of the soul.
Posted by Glynn at 5:00 AM

You make me want to read this book. Good review!