A Funeral in New Orleans 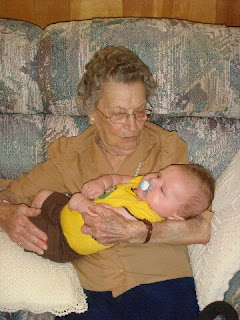 I’ve been in New Orleans for a funeral. It wasn’t a jazz funeral; no one second-lined with umbrellas in a street procession, although “When the Saints Go Marching In” was the last music played at the chapel service.

Aunt Tean (short for Laurentine) was my oldest living aunt – my oldest living relative, in fact. She died Jan. 22, and the visitation and funeral were this past Thursday. She was my mother’s sister, the one who spent Hurricane Katrina with my mother at her house in New Orleans. My aunt lived in the “Lower Ninth,” the Ninth Ward, that is, but Katrina and its aftermath forced her eventually to move to a retirement home.

She lived in that pre-Civil War house on Jourdan Avenue for 67 years. She lived her entire life – almost 91 years of it – within three blocks of that house. The area is called the Holy Cross District, named for the Catholic High School that physically dominates the area. It’s tucked alongside the levee of the Industrial Canal. During Katrina, my aunt’s house was flooded from two directions – from the north with the levee break at the London Avenue Canal and from the east with the disintegration of the levees along the Mississippi River – Gulf Outlet in St. Bernard Parish.

My aunt was many things: a preservationist who worked tirelessly to maintain and improve the neighborhood. An activist. A neighbor and friend. A piano teacher. A museum docent. A writer. A genealogist. The family biographer. A wife. A sister. An aunt. The family character and curmudgeon. The namesake for the community garden. A small woman who could eat more than most men three times her size. One of the individuals featured recently in the Wall Street Journal as a “voice of New Orleans.” 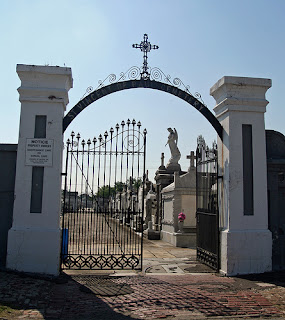 A lot of family and neighborhood history died with her. She was buried in St. Vincent de Paul Cemetery No. 2 in the Bywater/St. Claude District.

At the visitation, I saw relatives I hadn’t seen in decades (it’s what happens when you live away from home). Other than the obvious (we’re all a lot older), I was struck by how many memories could be evoked simply by physical characteristics (“Carol looks just like Aunt Lillian,” “It’s like looking at your father all over again”).

It was almost as if other relatives, long gone, had returned for a brief moment, and I was eight years old again, going to weddings, growing up with all the cousins, going to an amusement park when I was 13, family reunions at “that hall down on North Robertson in the Upper Ninth,” dancing to music played on a jukebox, sneaking a drink from an unsuspecting or uncaring bartending at weddings, and spending hours with Aunt Tean at the Louisiana Historical Society in the French Quarter while she did her research. Or the family taking bets on how many animals were buried in the pet cemetery in Aunt Tean’s back yard. And playing on the levee by the Industrial Canal.

A simple look, a glance, a roll of the eyes, a laugh – and it call comes back.

We’re all getting older. The aunts and uncles who were our age when we were younger are mostly gone. My mother – fourth youngest of six siblings – is now the family’s oldest living relative. She and her younger sister (who’s 83) are what’s left of the original Jacob family.

But then there are the children, the grandchildren, the nieces and nephews , the first, second and third cousins, an extended tribe more than a family. The tribe still lives mostly in southeastern Louisiana, except for a cousin in Mississippi, my brother in Houston, and me in St. Louis. Hurricane Katrina was initially a powerful dispersant of the family, but they all ultimately stayed together, still clustered around the core, the idea, the memory that is New Orleans.


Top photograph: Aunt Tean with my grandson Cameron Young, taken in New Orleans in May 2010 by Stephanie Young. Middle photograph: The gate at St. Vincent de Paul Cemetery.
Posted by Glynn at 5:00 AM

Would that everyone were so lucky to have an Aunt Tean in the family. You honor her with so many wonderful details of the person she was.

Gotta agree with Maureen's remarks Glynn. You do honor her and there is not greater honor and legacy than to be remembered and "revered." I pray that her legacy will continue to be passed on. And may you know the God of peace in a special way.

I love this, Glynn. We are big fanx of NO (for music and aura, not hurricanes). This reminds me in feeling of an old Lyle Lovett song The Family Reserves.

Beautiful, Glynn. I love your stories. And that big baby makes her look TINY...

"Hurricane Katrina was initially a powerful dispersant of the family, but they all ultimately stayed together, still clustered around the core, the idea, the memory that is New Orleans."

Beautiful words to honor someone apparently far more beautiful in so many ways.

Glynn, this was a pleasure to read. And how amazing that she was interviewed for the WSJ article. Clearly she was an icon of the community and your family. Thanks for sharing with us.

What an honoring tribute for your aunt.

And what a heritage for your little grandson.

moving backward
and forward in time

Glynn -- you tell this amazing woman's story with such heart and respect.

Beautiful -- and what an amazing legacy she has left in you and your family.

I loved this. I love it when you write about family.

It tugs my heart.

I'm sorry I missed this post, to express my condolences. This was a wonderful, nostalgic tribute to a moment in your history and the family that surrounded your growing up years ... and the ones going forward.