“A Study in Stone” by Michael Campling 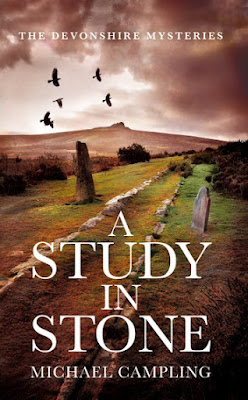 Dan Corrigan is taking advantage of his sister’s office to spend some time at her cottage in Embervale in Devonshire. He needs some serious downtime from his work in London, and he might possibly need to leave it behind permanently. Embervale is not easy to find, but he manages. And he discovers that the cottage has none of the modern amenities, like wifi.

But he does meet a nice neighbor, Alan Hargreaves, a teacher and writer. Together they eventually find what Dan considers a decent coffee shop in nearby Exeter. And the owner tells them the story of the spring behind the shop. Covering the spring is a stone with a coded message – and no one has ever been able to crack the code.

Dan and Alan set themselves to the challenge, and they’ve soon figured it out. But the owner is not only uninterested but downright hostile. And the two neighbors begin a search for the story behind the stone, which will take them back to World War I.

A Study in Stone is the first in the Devonshire Mysteries by British author Michael Campling. It’s an intriguing story in that it has no murders, no violence, and no crimes whatsoever. What it offers is a mystery engraved on a stone.

Campling is the author of four books in the Devonshire Mysteries series: A Study in Stone, Valley of Lies, Mystery in May, and Murder Between the Tides. He’s also published numerous works of science fiction.

A rather quiet story, A Study in Stone is nonetheless an engaging tale of secrets from the past, a family in turmoil, and an even a family would prefer to see left buried.