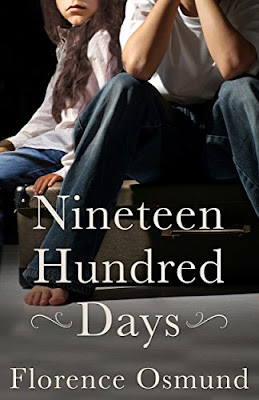 Ben Mattis, 12, and his sister Lucy, 6, live in rural Illinois, not far from Galena. Their home is isolated, and the two children are homeschooled, defined as mostly teaching themselves. Their mother works; their father, when he’s around, can usually be found drinking.

One morning their father leaves, saying he has to help their mother at her job. They children don’t think much of it, until neither parent comes home that night. Ben feeds himself and his sister, and they wait. A neighbor comes by the next day, but neither Ben nor Lucy answer the knock. They don’t know what happened to their parents, but both children are terrified of landing in the hands of Child Protection Services (CPS), because Ben has talked to kids with that experience.

They hide again when the neighbor, the sheriff and the CPS worker return. And Ben knows they need to flee to their aunt. And thus begins the journey of Nineteen Hundred Days by Florence Osmund. Added to the mystery of what’s happened to their parents are the artifacts Ben finds in the cellar while they’re hiding, artifacts which turn out to be worth more than a small fortune.

When they reach their aunt, they learn that she’s in the hospital. And here comes the dreaded CPS. It’s a coming-of-age story, a minor mystery story, and ultimately a story of tough love. (It also contains a notable amount of profanity.)

After three decades working for corporations and associations, Osmund retired to devote herself to full-time writing, Osmund has published several novels, including The Ring, They Called Me Margaret, Living with Markus, Regarding Anna, Red Clover, The Coach House, and Daughters, and the non-fiction book How to Write, Publish, and Promote a Novel. She lives in Illinois.

Nineteen Hundred Days is a hard story that the reader knows from the prologue will end well. The focus is on the 12-year-old Ben, the decisions he makes, and how he finally learns to grow up.