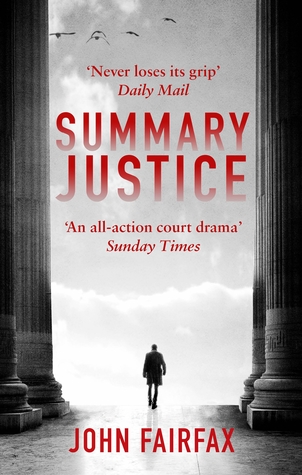 William Benson is not your typical British barrister. In his early 30s, he has a philosophy degree. He comes from a family of fishermen. Never married, he lives by himself with a cat on a houseboat on one of London’s canals. He’s also a convicted murderer.

Summary Justice by John Fairfax is the first in the William Benson legal thriller mysteries, and it keeps the reader wide-eyed at how all of this happened, the murder case Benson’s defending, how he’s managed to practice law after serving 11 years of a life sentence in prison, and how he’s managing to continue working despite the opposition of the legal establishment, a leading member of Parliament, and the family of his alleged victim, who are not above acts of petty harassment, vandalism, and even physical attacks.

The case Benson is the defending attorney for involves the murder of the owner of a transport company. A woman working for the company is accused of the murder, and it looks like an airtight case. Her DNA was even found on the murder weapon, a broken bottle of beer. She had motive, opportunity, and was seen at the scene of crime. The evidence seems seriously stacked against her.

What Benson sees, however, is the similarities to his own murder trial, and a successful defense may help vindicate his own experience, at least in his own mind. How the author weaves the past and the present together is one of the hallmarks of this first-rate mystery novel. And he adds to the narrative blend with Tess De Vere, the woman solicitor who is working with Benson. De Vere is a member of one of London’s most reputable legal chambers, and she faces intense opposition to her work with Benson. She’s also learning that Benson isn’t what she first thinks he is.

John Fairfax is the pen name for British writer William Brodrick, the author of the Father Anselm mysteries. Under the Fairfax name, he’s also published Blind Defence and Forced Confessions. Brodrick was a friar in the Augustine order before he became a barrister and a writer. The Father Anselm mystery A Whispered Name won the Crime Writers’ Association Gold Dagger Award in 2009. Brodrick lives in France.

Summary Justice becomes one of those books that is difficult to put down – until it becomes impossible to put down. Fairfax/Brodrick had a different sleuth altogether in his previous novels – a former lawyer who became a monk. In this series, he has a different kind of monk – a convicted murderer. It’s a crackerjack story.

My review of The Day of the Lie by William Brodrick.

My review of Brodrick’s The 6th Lamentation.

My review of The Gardens of the Dead by William Brodrick.

My review of A Whispered Name by William Brodrick.

My review of The Discourtesy of Death by William Brodrick.

My review of The Silent Ones by William Brodrick.