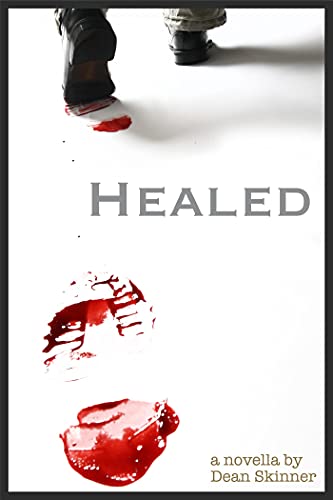 What a life!  It’s been one disaster after another for this man. One physical problem after another. Sometimes it’s an accident. Other times he’s been afflicted by things others have done. Everything he touches seems to turn to ashes.

But for three years, he’s been a Christian, and he’s been holding on to his faith. So far, the disasters haven’t stopped. He talks with a priest, Father Harry, and the talks seem to help. But Father Harry knows more than he’s saying, and he knows more about the man than the man knows himself.

The man’s name is Job. And yes, his story, Healed by author and artist Dean Skinner, is a retelling of the biblical story of Job. It’s missing the three so-called friends of the biblical book, and a figure in a hooded sweatshirt whose face is never seen but whose activities are out-and-out evil clearly plays the role of Satan. But Healed is the story of Job, told in a contemporary setting and a contemporary way (including considerable profanity).

Skinner had had a 20-year career in advertising when, after a serious bout with depression, he returned to a love of painting in 2012. His work has been displayed in numerous galleries and exhibitions. He has also published two novellas, Broken and Paths. He lives with his family in Cleveland.

One question keeps arising in the reader’s mind. We know how the biblical story ends, but will Healed end in a similar way? We’re kept guessing until the end. It’s a good story, a story of a man dealing with intense pain and almost horrible circumstances. And it’s a story that affirms life.