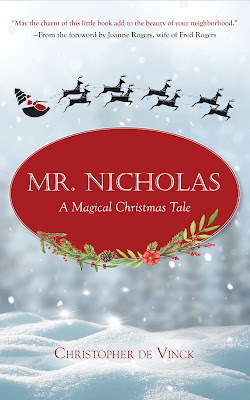 Jim is a reporter for The New York Times. He and his wife Anna, an artist, live in nearby New Jersey. Jim is very focused on his career; he was nominated for a Pulitzer Prize once and is determined to win one. He also likes sports. What he doesn’t seem to pay much attention to is his wife.

Trying to draw Jim closer, Anna gets pregnant and has a child, a boy. He’s named JB, and he has Down’s Syndrome. Jim is so appalled that he can barely look at his son. Instead of drawing them closer, the child has driven them, and especially Jim, further away. Anna finally insists on a separation and counseling. JB is now 10, and shuttles between the two. Counseling is not going well; it’s hard to imagine that a person who’s supposed to be a reporter and ferret out real stories is missing the story of his own family.

Jim lives near a hardware store run by Mr. Nicholas. It’s an unusual store in that it has everything. If a desired item is not readily apparent, Mr. Nicholas heads to the basement, and soon the product appears. People are always amazed. And a little suspicious. Children love Mr. Nicholas, but he’s so strange might there be something wrong with him?

Mr. Nicholas by Christopher de Vinck tells the story of what happens one Christmas with Mr. Nicholas, Jim, and JB. It’s a small story with a large-as-your-heart theme. The reader understands what’s going on, and JB certainly does, but what will it take for Jim and even Anna to understand?

De Vinck is the author of numerous novels and non-fiction works, including Ashes, The Power of the Powerless: A Brother’s Legacy of Love, Heart Speaks to Heart: Three Gospel Meditations on Jesus, Nouwen Then: Personal Reflections on Henri, The Book of Moonlight, and several others. He received his Ph.D. degree from Columbia University and spent 40 years in public education. He’s also published essays in The New York Times, The Wall Street Journal, Chicago Tribune, and other leading publications.

Mr. Nicholas catches the personality of a hard-bitten reporter exactly right. It captures the wonder and innocence of a boy who doesn’t know he’s not like anyone else, including his father. It shows the breakdown of a marriage, and its slow yet still miraculous rebuilding. And it tells a heartwarming story of Christmas and why we celebrate it.