“When I Come Home Again” by Jennifer Rodewald 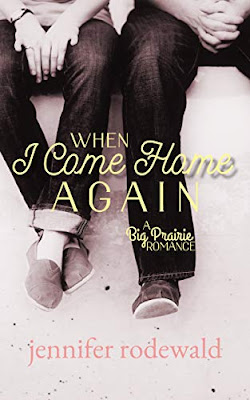 The past can come back to surprise you.

Brenna Blaum works as a speech therapist. She has a nice loft apartment in what had been the old Limestone Hotel in Big Prairie, Nebraska. She has a boyfriend who’s a psychologist and counselor at the high school. This is the town she grew up in, the town where her father was the storied football coach, and the town who’d loved her Down’s Syndrome brother Scottie, who died in a tragic accident with a snowplow.

And Big Prairie is now the town to which Craig Erickson, one of the best wide receivers thew town had ever seen, was coming home. He’s been gone for seven years, and he’s only coming back because his mother has cancer and needs help for both herself and the two boys she’s foster parenting.

Brenna and Craig had been a couple. Everyone expected them to eventually marry. So did they. But Craig’s football fame grew in college, it looked like the NFL was calling, and Brenna developed a bad case of jealousy over the girls who threw themselves at Craig and even envy at his success. She was a world-class runner, with hopes for the Olympics. They eventually broke up, and then Scottie’s accident happened. Brenna blamed Craig, because he should have been working out with her brother like he did whenever he was home.

A lot of anger is simmering right below the surface, and sometimes above the surface. Brenna thinks she’s over the relationship, but even her current boyfriend knows she’s not. And Craig is struggling.

When I Come Home Again by Jennifer Rodewald is the story of Brenna and Craig and the first in the author’s Big Prairie series. Rodewald tells a good story; the novel is well-written and a cut well above most romance novels.

When I Come Home Again is a story with a wide appeal. It’s a romance, to be sure, but it’s what I’d call a thought-provoking romance. You learn how the past can continue to haunt, about what’s most important in football, about the difficulties for foster parenting for both parents and children, about speech therapy, and about the values that guide life in a small town. It’s a well-done novel.