"The Madness of Crowds" by Louise Penny 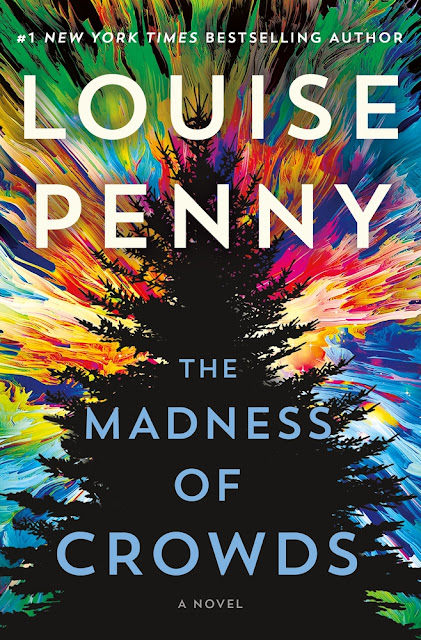 A new Inspector Armand Gamache mystery novel by Louise Penny is an event. Each story generally goes right to the top of the bestsellers’ lists, and with good reason. Gamache, his Quebec Surete colleagues, and his neighbors in the village of three Pines have legions of fans worldwide. And his fans have followed Gamache through thick and thin, from Montreal to Paris, from his unmasking political skullduggery at the highest levels of Canadian provincial government to his nearly dying.

We love Gamache and how he solves mysteries. We love his colleagues Isabel Lacoste and Jean-guy Beauvoir, who also happens to be his son-in-law. We love Gamache’s wife, Reine-Narie. And the Three Pines neighbors: bistro owners Olivier and Gabri, poet Ruth Zardo and her foul-mouthed duck Rosa, artist Clare Morrow, and bookstore operator Myrna.

The Madness of Crowds is the seventeenth Gamache novel, and it helps to know two things about the book. It was written during the COVID-19 pandemic, and it was written before the emergence of the delta variant of COVID. It is set just after the pandemic has ended, with the widespread availability of vaccines. The people are Three Pines are coming together for a Christmas and New Year’s celebration, the first such celebration post-pandemic.

Joining the celebration is a Sudanese woman nominated for the Nobel Peace Prize, one who endured mass rape, torture, and disfigurement to go on to create a foundation for women and children. She is a worldwide celebrity, and the residents of Three Pines are initially thrilled. Until they get to know her, and discover that sainthood often involves a brutal, caustic personality.

Gamache is called to a local university, to provide security for a speaker with unpopular views, in this case, the articulation of support for eugenics and the “culling” of the population, particularly during events like pandemics. Inspired by Charles Darwin’s theory of evolution, eugenics was especially popular in the late nineteenth and first-half of the twentieth centuries. In the United States, it was associated with Margaret Sanger, the founder of Planned Parenthood. In Europe, it was associated with Nazi theories of racial superiority, and it was the Holocaust that dealt what many thought was a death blow to eugenics. Biotechnology, however, has brought it back, although in a different form and using different names.

It is a woman professor from British Columbia whom Gamache must protect, even as he finds what she says and believes to be abhorrent. Contributing to this abhorrence is that fact that Gamache’s baby granddaughter Idola, the child of Jean-Guy and Gamache’s daughter Annie, has Down’s Syndrome.

Penny swirls all these currents and crosscurrents together, in the way only she can, to tell a fascinating story. Except something seems slightly off-kilter in The Madness of Crowds, and it’s not easy to say specifically what it is. It may be the disconnect of writing about a pandemic that has supposedly just passed, when the reader’s current reality is that COVID-19 is still very much with us. It may be that it takes several chapters before the reader knows what, exactly, are the controversial views the characters find to be so hateful. It may be that the murder, when it does finally occur well into the story, is connected to human experiments in the 1950s and 1960s. Using these experiments, the question of eugenics, and Sudanese atrocities as narrative devices in the novel runs the risk of a story without a center, and the book comes close to that.

There’s also a sense that the author did not deal well with what happened during the first year of COVID-19, and it surfaces several times in the experiences of her characters. It is Gamache’s wife who tell us what happened to her husband and son-in-law during the lockdown; Gamache and Jean-Guy make little reference to it.

I love the Gamache stories. I’ve been amazed with the first 16 books and how Penny consistently wrote on exceptional mystery novel after another. The Madness of Crowds is a good story, but it might have needed a simpler plot line; the story of the Sudanese woman, for example, could have been a separate Gamache story all to itself.

But we remain faithful to the inspector, his colleagues, his family, and his friends.

My review of Kingdom of the Blind.

My review of Glass Houses.

My review of A Great Reckoning.

My review of The Long Way Home.

My review of How the Light Gets In.

My review of The Beautiful Mystery.

My review of The Hangman.

My review of Penny’s A Trick of the Light.

My review of Penny’s A Fatal Grace.

My review of Penny’s Still Life.

My review of Penny’s The Cruelest Month.

My review of Penny’s A Rule Against Murder.

My review of The Brutal Telling.

My review of Penny’s Bury Your Dead.

My review of A Better Man.

My review of All the Devils Are Here.