What I Wish Someone Had Told Me About Dating 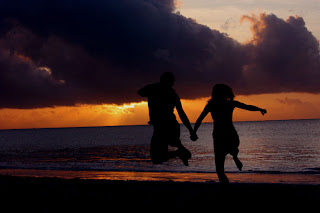 Over at Faith Barista, Bonne Gray is hosting a blog series this month – yes, this month, the one that contains Valentine’s Day, so you know that it’s going to be a blog series on romantic love. And the first topic is – “What I Wish Someone Had Told Me About Dating.”

I remember dating. I think. It was, oh, let me think about it, yes, it was something like 38 years ago, when Bonnie Gray hadn’t even been born.

I think I can remember back that far.

Actually, I can remember back that far. I can remember back to my first date. I was 13. It was to a junior high dance. Her name was Carrie. All of our teachers were there as chaperones. And it was shocking -- we didn’t know teachers could dance, or were even allowed to dance. And they were there with their spouses. At first it was embarrassing, like walking in on your parents when they’re all romantic. Then it was OK. But we never thought of our teachers in the same way again. (If you want to know the date, “Land of a Thousand Dances” was a big Top 40 hit at the time and the Beatles had just come to America.)

I could dance. My mother had taught me a lot of her late 1930s-early 1940s dances, including a rudimentary jitterbug. When I was 10, I taught my 18-year-old brother how to do the twist, and he was the one who watched American Bandstand all the time. (At my oldest son’s wedding in 2008, I had a great time dancing at the reception. Both of my sons were shocked. Their father didn’t just dance; their father performed. But I digress.)

But I had no mentor, no guidance, no advisor to tell me what dating was about. My older brother had left home by the time I started dating. I wasn’t about to ask my father. My mother told me a little. But I was essentially on my own, or had to listen to my peers, who knew even less than I did.

So I stumbled through the early years of dating, usually doing fine or at least not embarrassing myself too badly (I was polite and could be trusted; the girls’ parents always seemed to like me more than the girls did). I’d get crushes, usually lasting a few days or at most a few weeks. I “went steady” a few times.

It was all so serious and intense. Every new date seemed like a trial run for marriage, if not for me then for the girl. But nothing seemed to last or last for very long.

That’s what I wish someone had told me. It’s OK if things don’t last when you’re dating. You’re not going to fall in love with everyone you meet, and vice versa. So relax. Chill. Have a good time. When you meet the person you’re going to marry, you’ll eventually know it.

I met my wife when I had one semester to go in college. We met in the editorial office of the student newspaper at LSU. I was the managing editor and she was one of 35 reporters. And I remember her very first words to me, like it was yesterday.

“Do you have any stories for me to do?”

And I remember my first words to her in response.

“Yes. I need a story on the new chemistry building. It just opened.”

Three weeks later, we were talking about getting married.


To see more posts on "What I Wish Someone Had Told Me About Dating," please visit Bonnie Gray at Faith Baristahttp://www.faithbarista.com/2011/02/alsdkfjdkls/.


Photograph: Jump by Anna Cervova via Public Domain Pictures. Used with permission.
Posted by Glynn at 5:00 AM

My first date was with Bonnie Johnson when I was 13. I think she asked me out, and we went ice skating at a rink down the road from my house. She came to my house to pick me up (okay, so she totally took the lead here and I just went along). Not much happened after that, but I'll always remember it!

A dancer! I'm surprised all the girls weren't after you.

Ah Glynn. You put a smile in my heart -- not to mention a jitterbug in my step!

On my first date we went to the mall and looked at shoes (for him, not for me). I should have known then that it wasn't going to work out between us . . .

Chemistry building? You must have already felt the chemistry between you.

When I was in high school, I ran with a crowd on the fringe. We really didn't date a lot then; we went out as a "tribe," and there was very little pairing off. This was my church group -- we were so close and crazy about each other. We felt safe together. My parents were wise to encourage my having friends who went to our church -- then they had a link to the parent as well.

Anyhow. I don't really remember the first date I had -- but I know my first love was Vaughn. He and I were friends first [he was actually my brother's best friend], and then we found we enjoyed each other's company. I have no idea what we did .. it was the 70's. Nuff said.

The main thing I remember about dating was how awkward I was at it. And how much I enjoyed it anyway.

What an enjoyable story ... and ending!

I started dating my wife when we were babies. (I had just gotten my driver's license.)

I told her at some point, "We'll see how this goes." In my head, I figured we would date until things got boring. Funny. They never did.

I wish I'd been told that multiple times.

I love the way you spin a yarn.

Gosh, Glynn. Just when I have a hold on my favorite of yours, you go and put another one. I'm just gonna stop picking favorites. Just stack them up and tuck them away for a smile.

"And it was shocking -- we didn’t know teachers could dance, or were even allowed to dance." I had to read that paragraph over and over -- it just made me laugh. 'Cuz I felt the same abt my teachers when we saw them square dance in jr. high. Pure shock.

(sigh) I love getting nostalgic when people actually had to learn to dance. Now, people just get out there and move. :)

Oh, thanks for keeping the light on for me, Glynn. ;)