"A Fatal Obsession" by Faith Martin 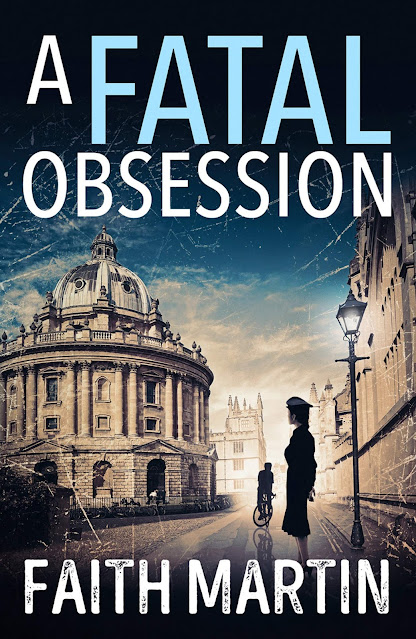 Trudy Loveday, 19, is a woman police constable (WPC) with the Oxford police. Actually, she’s a probationary WPC. It’s 1960, and a probationary WPC ranks pretty low in the police pecking order. As in, Trudy makes a lot of coffee for her bosses, answers phones, and does file work and the other duties women police officers are expected to perform. Her parents, especially her mother, are not pleased with her choice of profession.

But Trudy is determined to succeed. She’s smart, bright, and alert enough to tackle a purse snatcher and and a flasher. And she’s determined to do more. But what she needs is an opportunity.

The police have a serious case on their hands. A local business executive has been receiving threatening letters, saying something will happen to his son at a specific time unless the executive “does the right thing,” whatever that might be. The son is protected, but then a gardener is found murdered for no apparent reason. The gardener turns out to be the executive’s son from a liaison some 30 years before.

The coroner is Clement Ryder, the bane of policemen everywhere. Ryder was once a big-name London surgeon, until he suddenly quit and became a coroner in Oxford. Only he knows the reason – he’s in the early stages of Parkinson’s Disease. He’s not ready to throw in the towel quite yet, so he keeps himself engaged and busy in life with his coroner duties.

At the inquest, Ryder sees a face he recognizes from a case five years before, the mother of a young woman who died accidentally. And the dead gardener was tangentially involved in that case. And Ryder wonders if there’s a connection between the cases, and he wonders if the girl’s death was accidental after all. He decides to investigate the older case. But he needs someone in police uniform for the questioning to be official. And Trudy Loveday’s bosses see the perfect solution to her constantly asking for more responsibility.

A Fatal Obsession is the first of seven novels in the Ryder and Loveday series by Faith Martin. The pairing of the older and ailing coroner with the intelligent but green woman constable provides an entertaining overlay to the mystery story being solved. It’s a solid story, with a few twists and enough clues for the reader to produce an eminently satisfying mystery.

In addition to the Ryder and Loveday novels, Martin has also published the series she’s best known for – the DI Hilary Greene novels, as well as the Jenny Sterling mysteries. Under the name Joyce Cato, she has published a number of non-series detective stories. Both Cato and Martin are pen names for Jacquie Walton. (Walton as another pen name as well – Maxine Barry, under which she wrote 14 romance novels.) A native of Oxford, she lives in a village in Oxfordshire.

So fun to find these on Audible.