"The Grave Tattoo" by Val McDermid 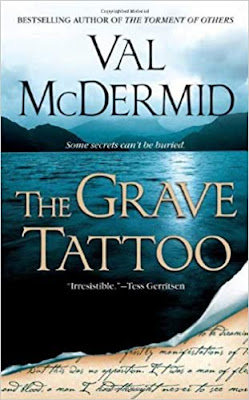 The Grave Tattoo by mystery novelist Val McDermid is one of the most unusual mysteries I’ve read in a very long time, perhaps the most unusual ever. The main narrative is based on a true story and a long-held rumor connected to that story. The actual crimes, when they occur, happen very late in the story. And while drawn very well and in great detail, it’s difficult to muster sympathy, or empathy, for any of the characters.

That said, the story is so well done that you’ll read it to the end.

Jane Gresham is a university lecturer in London, specializing in William Wordsworth and the Romantic poets. Her parents and brother live in the Lake Country – Wordsworth county – and that’s where Jane grew up. A long-held belief by people in the area concerns Wordsworth and a fellow school classmate, Fletcher Christian, he of Mutiny on the Bounty fame. The legend is that Christian returned to England, made contact with Wordsworth, and Wordsworth wrote down Christian’s story and transformed it into a poem, one never found.

Jane is ambitious; she’s seen a hint in a misfiled letter in the archives as the Wordsworth Museum in Grasmere, and she knows that if she can find it, her career is set. As it is, she has to hold down two jobs to make ends meet and live in a council house in London. She’s been “adopted” by a 13-year-old girl named Tennille who lives there as well; the girl hates school but loves poetry. Her mother is dead; she’s being raised by an aunt. Her father is rumored to be the gangster who runs all the illegal activities in the council housing project.

Then a “bog man” is discovered, a body found in the peat bogs common in the Lake country and preserved. This one is about 200 years old and bears tattoos common in the South Sea Islands. Jane, and others, think it may well be Fletcher Christian. She convinces her university boss to let her search for the Wordsworth manuscript and returns home. Then things get really interesting. Jane’s not the only one looking for the lost manuscript. And people begin to die.

If there’s a characteristic common to all of the characters in the story, it’s ambition, and often unbridled ambition. Jane wants to make her name. Her brother Matthew wants to get some of the credit; he and Jane aren’t on good terms. Jane’s former boyfriend is deceitful. The forensic anthropologist investigating the bog man wants to make her name, too. No one really stops to wonder at the ruthlessness masked and sometimes shown to elderly people who might know something, or some the barely legal activities the characters engage in. Even 13-year-old Tennille is on the run for trying to cover up a crime.

Yet The Grave Tattoo is so compelling that you continue to read on. Is there a manuscript? Will it be found? Is the bog man Fletcher Christian? And who’s killing people? Like I said, it’s an unusual mystery story.

A native of Scotland, McDermid attended St. Hilda’s College in Oxford and spent 14 years as a journalist in Devon, Glasgow, and Manchester. Her first novel was published in 1987, and she left her journalism career in 1991 to write full-time. Her crime novels have sold more than 16 million copies worldwide and been translated into 40 languages. She lives in Manchester and Edinburgh. The Grave Tattoo was originally published in 2006.