"Inside the Nazi Ring" by H.M. Denham 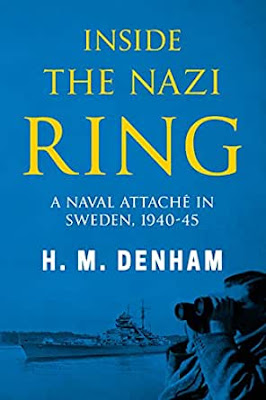 H.M. Denham had enjoyed a successful naval career. After graduating from the Royal Naval Colleges at Osbourne and Dartmouth, he served on a number of Royal Navy ships, including as captain. Then, in 1939, with war looming, he joined Naval Intelligence.

In 1940, he was sent to Sweden, a neutral country that appeared to be staying neutral only with Hitler’s indulgence. To get there, he traveled by boat to northern Norway, then occupied by the German Army. He found his way to Finland, from which he was able to cross the border into Sweden and make his way to Stockholm. His journey was actually easier than that of a colleague, a woman assigned to the Stockholm embassy who traveled there via Capetown, various African railways, a ship from Cairo to Istanbul, and eventually into the Soviet Union and on to Finland and Sweden. The trip took six months.

Inside the Nazi Ring: A Naval Attaché in Sweden 1940-1945 is Denham’s account of his years in Stockholm (six years in all, during which he did not see his wife back in England). As a neutral country, Sweden hosted embassies from all recognized countries, so that Denham often found himself pursuing similar ends as his German counterparts.

He tells a story that is rarely emphasized in historical accounts of World War II that focus more on military actions or life in occupied countries. Denham’s story is about ball bearings, iron ore, port facilities, and how the British (and presumably the Germans) often resorted to smuggling and deception to ensure needed supplies left Sweden and arrived in the U.K. This is the industrial counterpart to the military aspects of war.

Not that the military situation is ignored. Denham tells the story how, two days before the invasion of Norway by the German Army, Winston Churchill discounted the reports from his own intelligence agents. And Denham himself played a critical role in alerting the British of the movement of the German battleships Bismarck and Prinz Eugen into the Atlantic Ocean, where they met their ends at the hands of the Royal Navy. He also describes his experience of having his Stockholm apartment bugged and his movements watched – by the Swedish intelligence forces. And he must have done an effective job for the British, as the Germans and others were routinely seeking his expulsion.

Denham (1897-1993) wrote a number of military memoirs as well as travel books, including Dardanelles: A Midshipman’s Diary 1915-1916; The Aegean; The Adriatic; The Ionian Islands to Rhodes; The Tyrrhenian Sea; and Southern Turkey, the Levant, and Cyprus. After retiring from the Royal Navy in 1947, Denham became a travel writer and published a number of sea guides. He died in London in 1993.

Inside the Nazi Ring, first published in 1984 and now reprinted by Sapere Books, is a fascinating account of diplomatic life in wartime Stockholm, with its successes, failures, and dangers, and how “war” was waged even in neutral countries.