"A Patient Man" by Charlie Garratt 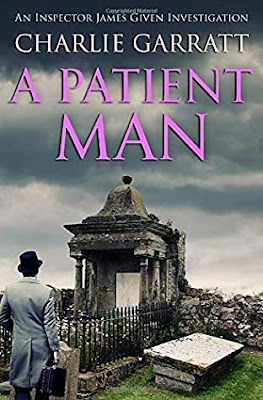 It’s September 1939, and Inspector James Givens of the Warwickshire Constabulary is having something of an existential crisis. He’s barely recovered from the wounds (physical and mental) he received in his last case, his boss has assigned him the duty of organizing old police case files, his Jewish family is pressuring him to find his missing uncle somewhere in Paris, Germany invades Poland, and Givens is ready to chuck it all in with the police.

He goes to Paris to find his uncle but has no luck. He’s called back home; what had appeared to be a suicide by an Anglican clergyman turns out to look like something else, and Givens is needed to sort it out. The case is difficult; the minister was found hanging in a room behind a brothel. Givens soon learns that this was no suicide. Finding the killer, however, is nothing but a series of dead ends.

A Patient Man by Charlie Garratt is the third in the Inspector James Givens series, and it’s a cohesive blend of murder investigation and personal crisis. Givens has adopted an English name and identity to avoid the anti-Semitism which seems as much present in England as it is in Germany. But too many things force the detective to keep grappling with who he is and where he comes from.

And an additional complication arises. In the course of looking for the missing Kindertransport girl who’d been staying with his parents, he meets her music teacher, Rachel Stevens. Rachel is also Jewish; and Givens finds himself doing what he thought he could never do again – fall in love. But er brother expects any potential husband for his sister to be a practicing and faithful Jew.

Garratt is the author of four Inspector Given mysteries, including A Shadowed Livery, A Pretty Folly, A Patient Man, and Where Every Man. He also published several community participation guides, until he retired and began writing short stories. One of those stories led to his first novel, A Shadowed Livery. He lives in Shropshire in England.

A Patient Man is a good mystery, depicting the frustrations of the job of a police inspector who’s struggling with his own identity. And the threat of war has now become something more than a threat.

A Shadowed Livery by Charlie Garratt.

A Pretty Folly by Charlie Garratt.