“At the End of the Matinee” by Keiichiro Hirano 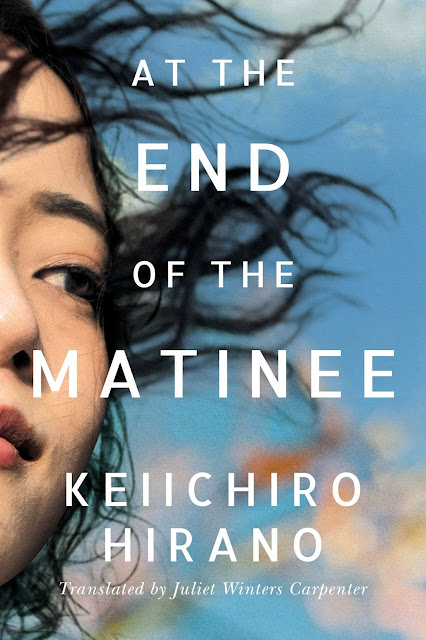 Satoshi Makino is a classical guitarist, but not just any classical guitarist. From a young age, he was always a prodigy, playing and performing his music with a skill that was breathtaking. He has never married, too focused on his music and his career. He’s now approaching 40, and he’s no longer a “young” prodigy. But his music is still enthralling.

Yoko Komine is a journalist. She’s based in Paris, has had two rotations covering the war in Iraq, and is currently off-assignment. She had her mother heard the 18-year-old Makino perform in Paris and were enchanted. She’s now approaching 41, engaged to an American economist, and preparing to begin a new chapter in her life.

The guitarist and the reporter meet one night at a dinner in Tokyo. The attraction is almost instantaneous, if left unspoken. But both seem to know, even if they don’t act on their feelings.

And so begins At the End of the Matinee by Keiichiro Hirano, translated by Julia Winters Carpenter. It is the second of Hirano’s novels to be translated into English, the first being A Man.

It is the story of two people, separated by thousands of miles, previous commitments, and even deliberate deception, who know they love each other but seem fated to remain separated. It is a moving story, often heartbreaking but always true to itself.

Like A Man, it is a story about identity, duty, commitment, honor, and love. It’s a story of how easily love can seem to slip away, how self-understanding often must change, and how nothing involving relationships is ever simple.

Hirano received a law degree from Kyoto University in Japan. In 1999, he submitted his unpublished novel Eclipse to a literary competition, and it won the Akutagawa Prize, going on to sell more than 400,000 copies. His novels include Farewell to the Departed, Ripples of the Dripping Clocks, Dawn, Fill in the Blanks, The Transparent Labyrinth, At the End of the Matinee, A Man, and others. He’s also published several collections of essays and interviews, and he’s been deeply involved in art and music. A Man won the 2019 Yomiuri Prize for Literature.

I worried at how At the End of the Matinee might end, but the ending is absolutely perfect. It’s a beautiful story, beautifully told.

A Man by Keiichiro Hirano.

Email ThisBlogThis!Share to TwitterShare to FacebookShare to Pinterest
Labels: At the End of the Matinee, book review, fiction, Keeichiro Hirano, novel