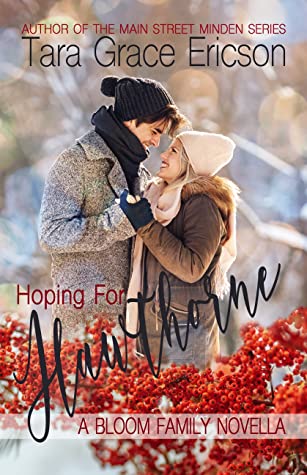 Avery Chase has returned home from Colorado. Fifteen years before, her family moved from Terre Haute, Indiana, to Colorado. Avery left behind several good girlfriends in the Bloom family, and one major crush, Hawthorne Bloom, four years older and generally oblivious of his sisters’ young friend. She’s back because she’s been hired to teach chemical engineering at the local university.

Hawthorne is now 33. He works as a handyman helper on his parents’ farm outside Terre Haute. Most of his six sisters live there as well, each managing a specific area of the farm. For years, Hawthorne has avoided taking major responsibility for anything, after the failure of his high-flying startup, dismissing fourteen employees, and having everything sold to pay debts. He’s got a major case of no self-confidence, and he spends his free time with his drinking buddies.

A chance encounter between Avery and Hawthorne at a bar sets in motion a chain of events. Hawthorne finds himself smitten; Avery finds the old attraction revving back up. But can Hawthorne step up to taking on more responsibility? And can Avery get over an old romance in Colorado that went nowhere?

Hoping for Hawthorne by Tara Grace Ericson is a novella that introduces the Bloom Sisters series of romance stories (there are five, with likely two more to go). It’s a sweet, intelligent story, with a heroine who doesn’t fit the usual mold of romance novels – she’s a chemical engineer and a professor – and a hero who’s struggling with what may be self-imposed guilt and can’t get past it.

In addition to the Bloom Sisters series, Ericson has published five stories in the Main Street Minden series and several in the Heroes of Freedom Ridge series. An engineer by education and career, she lives with her family in Missouri.

Hoping for Hawthorne is a thoroughly enjoyable story, well-written and well-plotted, with real-life characters that bring the story to life.