"Prove It: Murder in the Mix" by Hannah Kurz 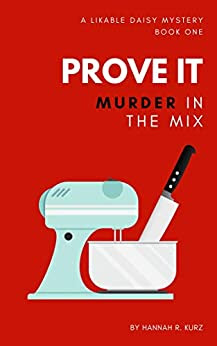 Stephanie Yu and her husband Henry have just welcomed a newborn daughter into their family. They live in an apartment above a bakery called The Likable Daisy in a city like Syracuse or Buffalo in New York, whose goods Stephanie has a very difficult time resisting. The Yus know the bakery owner and employees as well as the other apartment residents in the building.

She’s has taken maternity leave, and she’s debating with herself whether or not she wants to return to her job as a graphic designer. Her days are filled with nursing the baby, resuming something of a normal life after the pregnancy, and figuring out how to deal with her hypercritical mother-in-law.

Sameed Haddad is the bakery’s owner, and he’s considered something of a wayward member of his devout Muslim family. He’s even in the midst of a divorce from his wife, who’s non-traditional Muslim herself. Early one morning, arriving to open the bakery, the chief baker discovers Sameed’s body in the kitchen.

Everyone including the police think it’s an accident; it appears Sameed’s tie was caught in a mixer and strangled him. Everyone, that is, except Stephanie, who can’t accept the accident theory. She has an uphill struggle to convince anyone, but she keeps at it. And eventually even the police take another look. And this time they decide it’s murder.

Prove It: Murder in the Mix by Hannah Kurz is the first in the Likable Daisy series of mysteries, one that falls into the “cozy” mystery category. The second is a work in progress that Kurz is writing with her husband. She lives with her family in western New York.

The story builds slowly, with as much initial focus on Stephanie being a new mother as there is on the mystery of the man’s death. But it builds toward an eminently satisfying conclusion. This graphic designer / new mother deserves kudos for seeing what everyone else around misses and stubbornly pursuing what she knows is the truth.

Hannah Kurz talks The Cozy Sleuth about her book and writing.