"The Adventure of the Beryl Anarchists" by Craig Stephen Copland 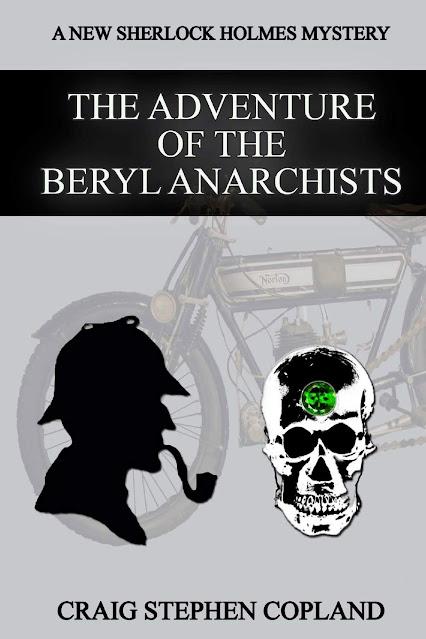 It’s 1912, Dr. Watson in 59 and Sherlock Holmes is 57. And in pursuit of their next case, both men are going to utilize a newfangled machine called the motorcycle.

In The Adventure of the Beryl Anarchists by Craig Stephen Copland, Holmes and Watson are consulted by a private banker. The man’s records have been stolen from the safe in his home, and they contain an account of all payments made by customers – including payments made to keep certain people quiet about everything from affairs to bribery. Some of the leading names in Britain could be threatened by blackmail.

And as expected, the first attempt to extort money goes to a lord and lady rather notorious for their dalliances. The titled pair laugh it off, believing the publicity will be fantastic for their upcoming tell-all book (it is). The second attempt includes a kidnapping, and it goes seriously wrong.

The trail to the culprit, or culprits, will lead through the banker’s own family, to veterans of the Boer War, a motorcycle club, and even to a boy scout camp-out. It’s a thrilling tale with an exciting, cliffhanger-type of ending.

Copland is a longtime fan of Arthur Conan Doyle’s Sherlock Holmes. After he retired, he set himself a goal of writing a new Sherlock Holmes mystery related to and inspired by each of the 60 stories published by Conan Doyle. He’s also written monographs on Holmes and two non-Holmes mystery stories featuring a detective in the Old American West, the Reverend Ezekiel Black. He currently lives and writes in Toronto, Buenos Aires, New York, and the Okanagan Valley in British Columbia.

The Adventure of the Beryl Anarchists is a tale of revenge, outrage, and outright evil, with Holmes and Watson receiving last-minute help from a completely unexpected source. The emphasis is less on Holmes’s thinking and detective skills and more on an action-packed story.