Stories of Art and Crime, edited by Lawrence Block 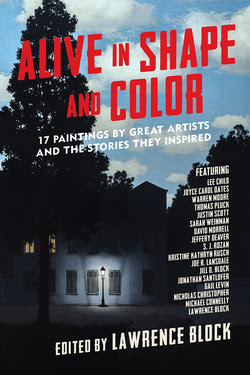 A dock worker at the Metropolitan Museum of Art falls into an opportunity to sell paintings attributed to Renoir but really aren’t.

A Gauguin painting of “Girl with a Fan” tells several stories simultaneously, including the World War II bombing of the famous Van Gogh “Yellow House.”

Using a Hieronymus Bosch painting as a guide, someone is someone is killing people.

The desire to find cave paintings as significant as those of Lascaux lead to a story of revenge.

Charlie the barber is trying to get past PTSD after imprisonment by the Japanese in World War II; he may look like a Norman Rockwell painting, but he’s anything but.

These are five of the 17 stories using works of art as their inspiration in Alive in Shape and Color, edited by prolific (and legendary) mystery and suspense writer Lawrence Block. This volume followed a successful and similar effort: In Sunlight or in Shadow: Stories Inspired by the Paintings of Edward Hopper. Most of the same writers signed on to the second volume, so they must have enjoyed the venrure as much as the reader does.

In addition to block himself, the writers include Lee Child, Michael Connelly, Jeffrey Deaver, Joyce Carol Oates, Nicholas Christopher, Gail Levin, and more. They each chose the painting they wanted to write a story about, and the artists represented (in addition to the ones mentioned above) include Georgia O’Keeffe, Salvador Dali, Balthus, Auguste Rodin, Rene Magritte, Michelangelo, and more.

Most are crime stories (they would be, given the authors), but a few fall into the category of horror. All of the stories are dark ones, or they tell stories that examine the dark side of the human soul and mind. A particular favorite is “Orange is for Anguish, Blue for Insanity” by David Morrell, in which more than one person faces insanity in tracking down what happened to Vincent Van Gogh and his own insanity.

Art, crime, horror – if you like the combination, Alive in Shape and Color is a veritable feast.