"The Hope That Kills" by Ed James 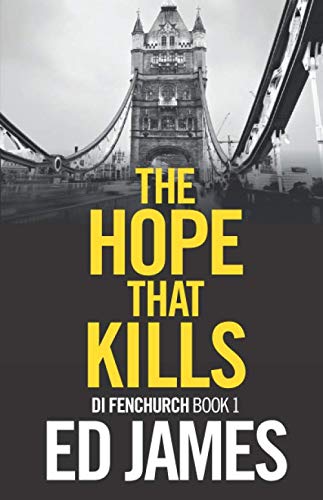 A young, likely 16-year-old prostitute is found brutally murdered in an East End building slated for demolition and redevelopment. There’s no ID, no apparent motive, no witnesses, and a dead CCTV camera. The guard who supposedly is responsible has seen or heard nothing, she says. Slowly, very slowly, do Fenchurch and his team unravel the mystery, with an offhand comment here, a vague recollection there, some help from the local villains, and both help and obstruction from the team handling vice.

The victim is about the age his kidnapped daughter would be. Fenchurch has never been able to resolve in his own mind – and heart – what happened to Chloe. It cost him his marriage. It keeps him at arm’s length from people. And it’s loaded him with guilt.

A second victim is found, this time in an obscure section of a car park. It’s like the first one, except this time there is CCTV coverage. All signs point to a banker, who’s rather conveniently found dead when the detectives go to his flat to question him. He’s died of an apparent overdose of heroin, but things don’t sit well with Fenchurch, and the post-mortem will bear him out. The killer was himself murdered.

The Hope That Kills is the first in the DI Simon Fenchurch series by Ed James. It is a gritty, absorbing police procedural with an emphasis on the plodding, unexciting but vital work that solves crimes.

James is the author of several crime, mystery, and police procedural novels. He has six books in the DI Simon Fenchurch series, eight in the Scott Cullen series, three in the Cullen & Bain series, three in the Craig Hunter series, two in the Vicky Dodds series, and one in the Corcoran & Palmer series. Formerly an IT product manager who wrote during his daily commuting and travel times, he’s now a full-time writer living in the Scottish Borders area of the UK.

The Hope That Kills has a sympathetic lead detective, a haunting back story, solid supporting characters, and a fast-paced narrative that keeps the reader guessing. And don’t forget the edge-of-your seat conclusion.