"Love Me Timeless" by Melissa Crosby 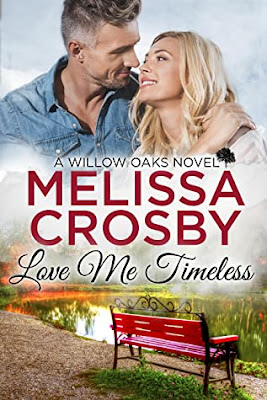 Carly Matthews is 32, the youngest of three sisters, and still living with her parents in Willow Oaks, Oregon. She’s facing the possibility of a recurrence of breast cancer, and she’s preparing for a double mastectomy. Her hopes for love and having her own family appear increasingly remote, except for a recent online development. Through an app that allows neither photos nor real names to be used, she’s been corresponding with a man she’s falling in love with.

Mick Myers is a native of Willow Oaks, but long before he left to avoid the disapproval and condemnation of his father. He’s a successful property developer in New York City, but now he’s coming home to meet the person with whom he’s been maintaining an online romance. Mick is 50, and he barely remembers the girl who’s christening he attended when he was 18. Whoever this unknown is, he knows he’s seriously in love.

Arriving at the coffee shop meeting place, Mick realizes what has happened, and he’s able to cover his appearance in town with a supposed business opportunity. Carly thinks she’s been stood up, but she enjoys talking with Mick. A romance looks like it might be beginning, but two hurdles exist – the age gap and Carly’s decision not to tell Mick about her upcoming surgery and underlying medical problem.

Love Me Timeless by Melissa Crosby is unusual in romance novels; you usually don’t find an age gap of 18 years between the hero and the heroine. But Crosby pulls it off, using Mick’s maturity to withstand what might have been overwhelming to a younger man.

Crosby writes small-town romance novels. Love Me Timeless is the fifth in the Willow Oaks series, and she also has two novels in the Mulberry Lane series. She lives with her family in Wellington, New Zealand.

It’s an intriguing story, about overcoming obstacles and doubt, and how two people find each other and who they really are despite a difference in ages.