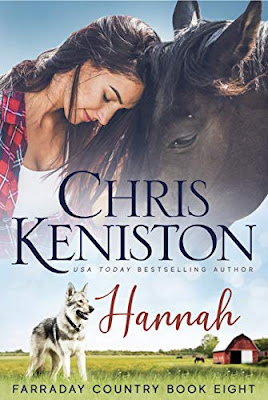 Hannah Farraday, of the Texas Hill Country Farradays, has moved to West Texas, home of another branch of the Farraday family. She’s in the process of setting up a horse therapy business, using horses and riding to help people recover from physical and emotional tragedies. She’s taking one of the horses for a ride when a motorcyclist startles the animal and Hannah ends up on the ground.

Dale Johnson is the motorcyclist, and he comes to Hannah’s aid. Johnson is desperately trying to get to New Mexico using country roads; the man is on the run from some unspoken danger. He is in the area for one reason – to let his former Dallas police partner (and now town sheriff) D.J. Farraday know what’s happening.

Johnson has recently left a hospital, and the last thing he should be doing is sitting for hours on a motorcycle. He develops blood clots, and the West Texas Farradays find themselves with an unexpected guest for a few days while he recovers. Which suits Hannah just fine. Dale needs to leave and knows he’s endangering everyone with his presence, but the clots have to dissipate, and he’s becoming interested in Hannah.

Hannah is the eighth book in the Farraday Country series by Chris Keniston. It’s a well-written romance with an intriguing and well-developed premise, but I have two relatively small complaints. If mild profanity doesn’t fit or seems awkward to the reader, it may be that it was force-fitted on to dialogue. If it adds nothing to the story or the characters, don’t use it. Second, the resolution of the mystery at the heart of the story is a bit too convenient; some indications could have been added or alluded to earlier on.

Keniston is the author of numerous romance novels and stories. She has nine books in the Hart Land series; eleven in the Farraday Country series; nine in the Aloha Closed Door Series; six in the Surf’s Up series (episodes); nine in the original Aloha Series; six in the Family Secrets series; two in the Honeymoon Series; and one in the Main Street Romance Flirts Series. She and her family live in suburban Dallas.