“The Cyclist” by Tim Sullivan 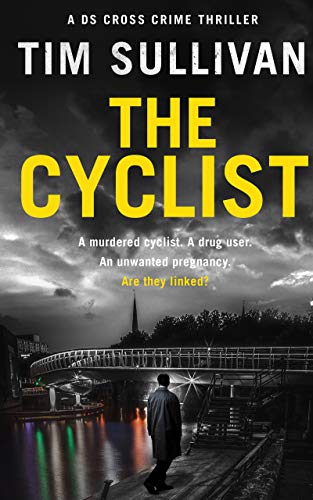 A construction crew tearing down garages behind an old council estate uncover a body in one of the them. The body has been wrapped in plastic and placed there fairly recently. But there’s no identification – no wallet, no phone, nothing that might say who the victim is.

Detective Sergeant George Cross and Detective Sergeant Ottey of the Somerset and Avon police force are on the scene. Ottey has to manage Cross almost as closely as she investigates a murder. Cross is on the autism spectrum, and what he considers normal conversation can be seen by others as rudeness, lack of empathy, or even hostility. More than once their superiors have considered transferring or doing something with DS Cross. The problem is that he systematically and methodically plows through a case, sees what everyone else misses, and has a 97 percent conviction rate. Prosecutors love him because he always gives them a solid case.

Because he himself rides a bicycle to and from work and most other places, Cross knows the body is a cyclist. Eventually they learn he’s one of two sons in a family owning a Greek restaurant. Everyone thought he was in Tenerife with his cycling team, a popular place for cyclists to practice. Only his team knew that he wasn’t, having received a cryptic message about a torn hamstring.

The Cyclist is the second in the DS Cross Mysteries by British author Tim Sullivan. Like its predecessor The Dentist, which introduced us to DS Cross and his colleagues, it is a finely spun story that is as much about the mystery at hand as it is about Cross’s autism journey. With a number of possible suspects, ranging from the victim’s own family to shadowy underworld figures in Greece, Cross has his work cut out for him. And even when his superiors are satisfied, if Cross isn’t and knows something is still amiss, he doggedly continues on.

Sullivan has been a film director, screenwriter and novelist. His credits include sitcoms, televised crime drama like Maigret and The Casebook of Sherlock Holmes (starring Jeremy Brett). His movie screenplays include A Handful of Dust (starring Kristen Scott Thomas, Judi Dench, and Alec Guinness) and Where Angels Fear to Tread (with Helen Mirren and Helen Bonham Carter). He also directed Coronation Street and Thatcher: The Final Days, among others.

The bad news is that there are currently on two DS Cross mysteries published. The good news is that a third, The Patient, is scheduled to be published in early 2021.

My review of The Dentist by Tim Sullivan.

This sounds like an interesting read Glynn. I'll have to check with my local library.