"The Revolt of the Public" by Martin Gurri 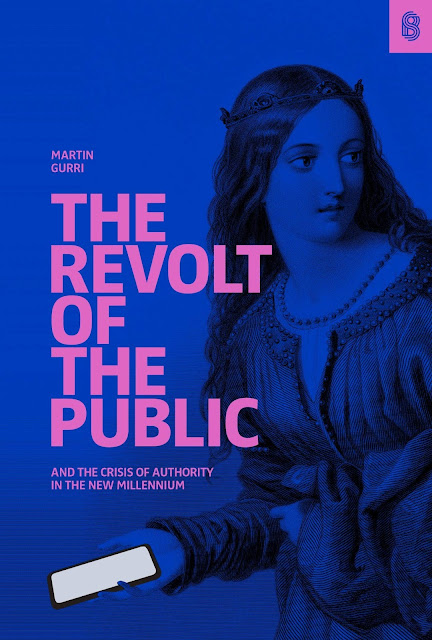 The Revolt of the Public and the Crisis of Authority in the New Millennium by Martin Gurri was first published in 2014, and then the author added a rather extensive chapter entitled “Reconsiderations” in 2018. The addition didn’t revise or change anything from the 2014 book; it simply updated the information with the events of 2016 and after. And it is a very compelling, and disturbing, book to read in the first quarter of 2021.

A former CIA analyst specializing in global politics and global media, Gurri’s thesis is relatively simple: that the age of information has seriously undercut traditional elites and hierarchies, to the point where trust and credibility by the public are gone. He delves into example after example – the Arab Spring of 2011, the presidency of Barack Obama, whose election repudiated the traditional elites in the Democratic Party (as Barnie Sanders almost did in 2016); Brexit, there the British public turned a deaf ear to the elites in government, academia, business, culture, and the media; the election of Donald Trump, which repudiated both the Democratic Party and the traditional elites of the Republican Party.

Over and over again the public, armed with the staggering amount of information available on the internet, questions, rejects, repudiates, cancels, and ignores the traditional authorities created during the industrial age. Information networks and hubs have replaced hierarchal authority and experts. The problem is that networks can’t govern a nation state or even a region. But neither can the former authorities who longer have the consent of the governed.

What Gurri is arguing certainly helps explain the paralysis that has characterized government in Washington, D.C. Politics increasingly exemplifies paralysis. People in political parties no longer trust anyone in the other party; they often don’t trust people in their own.  This idea of trust is critical. Resolution will only come when the public settles on new elites to govern, and that is a process that may take generations.

To be clear, Gurri is not talking about the public as the mob taking over parts of Seattle, rioting and burning in Minneapolis, or invading the U.S. Capitol. (In fact, he finds fault with a news media constantly amplifying tiny groups of people as representative of larger crowds.) No, the public is us, the people who read books, manage businesses, plow farms, drive trucks, work in hospitals, teach, sell cars, run factories, belong to and lead unions, and do a million other jobs. The age of information has taught us to mistrust authority, seek people of like minds in echo chambers, and increasingly think of opposing views as those of the enemy.

And, he says, we may be floundering for a while. It’s really strange to be reading Gurri as he talks about the worst thing that threatened elites can do – repression – and see exactly that happening on the internet, in the news media, and leading American progressives talking about the need for re-education camps.

Gurri makes it very clear that he is anything but a supporter of Donald Trump. But he understands what gave rise to Trump and his predecessor, what created Brexit, what’s tearing at the fabric of the European Union, and what continues to create strife in the Western democracies. The Revolt of the Public is not an easy read, but it’s an important one for understanding the times we’re living in.