“The Slaughterhouse Murder” by Roy Lewis 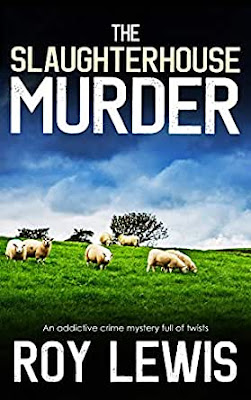 The Slaughterhouse Murder is the 13th entry in the Eric Ward mystery series by British author Roy Lewis, and it’s something of a surprise. There’s less, considerably less, Eric Ward in this story than the previous 12, so much so that the story moves almost into the category of police procedural rather than legal thriller.

A farm near Newcastle-on-Tyne is staked out by police for illegal processing of animal meat. The owner has rented his barn to the processors but is having to spend considerable time with his wife and a sick relative in Ireland. The police make the raid, but one of the villains escapes after injuring an officer. The owner is eventually interviewed but not charged.

The farm in question is occupied by a tenant of Eric Ward’s now-former wife Ann. Ward looks into it, sounds out various people involved, and has his gossip-laden friend Jackie Parton look into things. What Parton, and then Ward, stumble into is something much bigger than illegally scorching sheep carcasses; there’s apparently a huge move afoot by criminal elements to upset old crime fiefdoms. Ward is even approached by a government enquiry group to be part of the investigating team, but he turns it down.

The story focuses as much, if not more, on the police teams investigating a murder, organized crime, and more as it does on Ward. The divorce from his wife means there’s little of the lawyer’s personal story, which has always been a hallmark of the previous novels. There’s also the possibility of a new love interest, but it goes no further than a first date to the ballet and dinner. The Slaughterhouse Murder is still well-written, interesting, and entertaining, but I’m missing some of the old magic. Perhaps the next two in the series, both of which are now published, will return to that.

The Farming Murder by Roy Lewis.

The Quayside Murder by Roy Lewis.

The Diamond Murder by Roy Lewis.

The Geordie Murder by Roy Lewis.

The Shipping Murder by Roy Lewis.

The City of London Murder by Roy Lewis.

The Apartment Murder by Roy Lewis.

The Marriage Murder by Roy Lewis.

The Wasteful Murder by Roy Lewis.

The Phantom Murder by Roy Lewis.