"In the Wine Press: Short Stories" by Joshua Hren 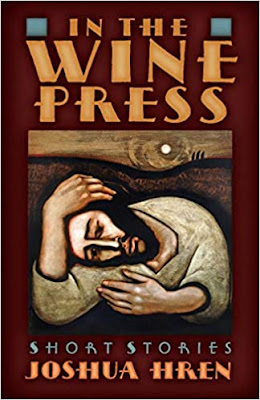 The wine press is an old Christian metaphor and image, going back to New Testament times and interpreted by St. Augustine. In the pre-Reformation era, the wine press was a popular image for art and stained-glass windows in churches, signifying the crucifixion of Christ through the crushing of grapes to produce wine. It’s an image of suffering from which something good will happen.

In In the Wine Press: Short Stories by Joshua Hren, suffering in this world is a central theme. Characters in the 13 short stories are experiencing suffering of one kind or another, whether it’s a child’s abuse by a priest, a mother determined to seek justice, or a young woman gunned down in a mass shooting in a cafeteria. These are stories with characters connected to each other, either in suffering or in family relationships or both. They grapple with loss, with conscience, with anger, and with love. In other words, these are stories about life.

In “Horseradish,” a father and his adult son try to make sense of each other and their lives. “Work of Human Hands’ describes what is going through a priest’s mind as he contemplates abusing a child he’s teaching privately (and it’s a hard story to read). The boy’s mother seeks justice. “Old Blood” tells the story of a young man who kills 17 people in a university cafeteria but leaves us, like in real life, desperately looking for the motive.

In “Some Other Exit,” a father is distracted (or distracts himself) by work while the mother attends a rock concert to find her lost son. “Their Fire is Not Quenched” concerns a man who moves back to his childhood home to care for his ailing father, and he recalls a visit by a priest. In “A Little Bank in My Soul,” a man has kept accounts of what his wife – who’s left him – has contributed to their marriage.

“Sick at the Thought” is about the damage inflicted by family secrets. “Darkly I Gaze into the Days Ahead” is the story of a teacher who’s forced to endure a visiting politician’s speech at the high school where he teaches. “Tears in Things” is the story of a church secretary, told to destroy what she knows are incriminating files about abusing priests, struggles to do something else.

Hren is an assistant professor of English at Belmont Abbey College in North Carolina. His teaching focuses on political philosophy and literature and Christianity and culture. He is a co-founder the school’s Honors College and is also the founder of Wiseblood Books. He is also the author of This Our Exile: Short Stories (2018) and Middle-earth and the Return of the Common Good: J.R.R. Tolkien and Political Philosophy (2018). Two of his forthcoming works are How to Read and Write Like a Catholic (2021) and Infinite Regress, a novel. His essays have appeared in such journals as First Things, America Magazine, Commonweal, and LOGOS.

The stories of In the Wine Press are all dark stories, to be sure, but they’re dark in the same sense that Flannery O’Connor’s stories are dark. As bad as things can be, as intense as the suffering can become, a sliver of hope and the possibility of redemption always exist.