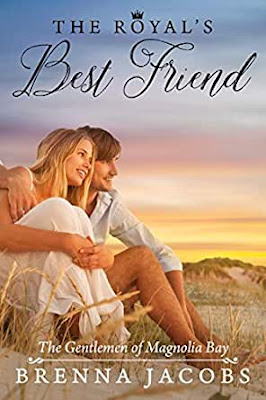 Peyton Shellhouse has just secured her family’s island home in Magnolia Bay, South Carolina, in advance of a hurricane, when the bridges are closed. She stays with the property, but she loses all communication with the outside world. Her best friend, Will Maxwell, lives and works in London, and is so desperate to make sure she’s safe that he flies to the States.

Will is the younger son of an earl, which means no inheritance and no title, except “gentleman.” His two best friends from Cambridge University are younger sons of titled aristocrats as well. They call themselves the gents, and they’re going about trying to figure out how to make living like everyone else.

Peyton and Will may be best friends, but they both harbor strong feelings for each other. And perhaps something stronger than “strong feelings.” As Will stays to help cleanup from the storm damage, he convinces his two friends to come over and help as well. And then Will’s old girlfriend Bianca arrives. They’ve broken up numerous times, always because of something outrageous Bianca has done. She may be beautiful, but she’d give Cruella De Vil a run for the money.

Will suggests, and Peyton reluctantly agrees, a sham dating relationship to make Bianca go away. What Will doesn’t expect is that Peyton, with steel magnolia charm, will not only run rings around Bianca but Will as well.

The Royal’s Best Friend by Brenna Jacobs is the first in the Gentlemen of Magnolia Bay series by Brenna Jacobs. It’s a fund, light read, telling a good story about two people have to learn how much they not only care for each other but actually love each other profoundly.

Jacobs has published numerous romances in three series – the Sweet Romantic Series, the ABC’s of Love series, and the Gents of Magnolia Bay series, which includes The Royals’ Enemy and The Royal’s Fake Bride.

With The Royal’s Best Friend, if you like southern charm, an island romance, with a dash of British aristocracy, I think you may have found your story. Not to mention a villainess who gets her comeuppance.