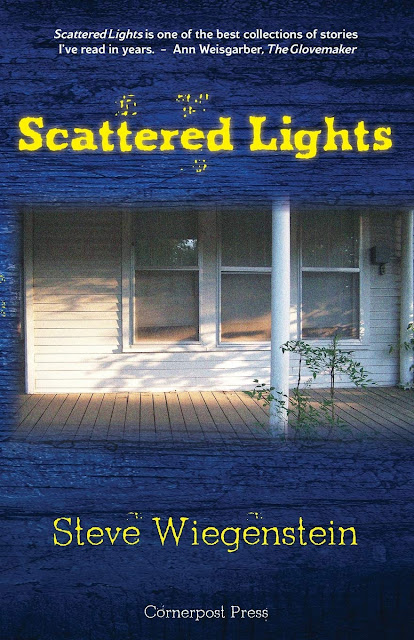 You read the 12 stories of Scattered Lights, the new collection of short stories by Steve Wiegenstein, and you almost feel that you’ve come home. “Home” for Wiegenstein is the eastern Missouri Ozarks; my own is a bit to the south, down in Louisiana. But the characters are familiar, the culture of the Missouri region shares some similarities with northern Louisiana especially, and the stories are “true” in the sense that your heart and your head tell you, “Yes, I know people just like that. Some of them were in my family.”

One story, “Why Miss Elizabeth Never Joined the Shakespeare Club,” offered a laugh-out-loud moment, Miss Elizabeth lives in the small town of Piedmont, and she gives piano lessons. She has never been invited to join the Shakespeare Club, something like a local junior league with all the trappings of status but none of the service projects. The ladies do occasionally discuss Shakespeare, but its only his name that matters to this group. Miss Elizabeth’s house overlooks an old, abandoned homestead, and what she sees from the window one day – what could only happen in a small town – is what will prevent her from every being invited to join the club.

“Miss Elizabeth” may be the funniest story in the collection, but all the stories exhibit a wry understanding small-town life. “The End of the World” is told from the perspective of Larry, who works in the produce section of the local Dixie Food Mart. Larry has joined his fellow church members in something like a tent city near the river, expecting the rapture as predicted by their minister. But the appointed hour arrives and passes.

In “Weeds and Wildness,” Mark is the son of the minister at the First Baptist Church. He’s somewhat at loose ends after high school graduation, so he goes to work at the Farm & Home Supply Store and helping his grandfather out down at the old place, helping care for a youth retreat nearby. One night he will get himself entangled with a recluse, old Charley Blankenship, who’s been released from prison and needs Mark’s help.

“Trio Sonata in C” is a story of living with an elderly relative with increasing dementia – and a fondness for checking home security while carrying his gun. In “From Thee to My Sole Self,” a woman increasingly believes that her daughter is not the child of her husband, but the man who was office manager. “The Fair” is about country fairs, raging teenage hormones, and a man with an itchy trigger finger who really doesn’t trust carnival workers. “In Bill Burkens and Peter Krull,” you can see all kinds of things from your back window at night.

And there’s more, exhibiting the author’s practiced eye at not only observing people but knowing and understanding them. The work that keeps coming to mind is “affectionate,” because it is people like these characters who shape our lives.

Wiegenstein is a graduate of the University of Missouri and for several years worked as a newspaper reporter. He returned to school so he could teach at the university level, and he’s taught at Centenary College in Shreveport, Drury University. Culver-Stockton College, and Western Kentucky University. He is also the author of Slant of Light, This Old World, and The Language of Trees, which received the Missouri Writers Guild’s Walter Williams Major Work Award in 2018.

Read this man’s stories in Scattered Lights. You’ll find people you recognize, perhaps a relative or two, and if you look hard enough, a bit of yourself as well.