"Meet Me Under the Mistletoe" by JoAnn Durgin 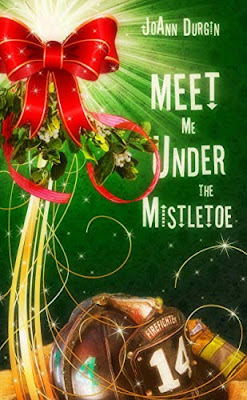 Starlight is a small town in Iowa, with a strong sense of community and small-town values. Firefighter Jake Marston is perfectly content to live in the house he grew up in, do the work he does to protect the community, help whenever he can, and actively volunteer his time. He had a girlfriend, but the big city lights of Des Moines beckoned, and she let him know she had left – by email. He has a secret, a vow he made to God. He will not kiss a woman until he knows she is the one he’ll marry.

Julia is the sister of Jake’s best friend and firefighting colleague Dylan. She’s visiting from Cedar Rapids, where she works as a hospital nurse. Jake finds himself enormously attracted to her. But there’s a problem: Julia is engaged, Dylan says, even if she isn’t wearing an engagement ring. And, his friend says, she’s really touchy about the subject, so it’s best to avoid it.

Jake agrees, but that doesn’t stop the attraction. He goes out of his to avoid her, but events seem to conspire to throw them together. But Julia has a secret of her own, and if she tells Jake what it is, she might risk any kind of relationship with this guy she finds herself falling in love with.

Meet Me Under the Mistletoe by JoAnn Durgin is the story of Jake and Julia. It’s a fun, sweet story about small towns, friendship, romance, and faith, with a hometown hero who'd like nothing better than to settle down, find love, and raise a family.

Durgin is the author of numerous romance novels, published under 10 series. Meet Me Under the Mistletoe is the first of four novels in the Starlight Christmas series. She and her pastor husband have lived all over the United States, and currently live in Kentucky. She’s been writing and publishing since 2010.